Welcome to Snowdonia Croeso i Eryri

The Snowdonia National Park, which has the evocative Welsh name of 'Eryri' meaning ' the place of the eagles', is an area of outstanding natural beauty covering 838 square miles and containing some of the most magnificent scenery in Wales.

The National Park encompasses an area spanning from just south of historic Conway on the North Wales coast, toward Caernarfon in the west and southwards to picturesque Aberdovey and the popular Lake Bala in the east. Its rugged highlands and beautiful valleys are rich in cultural heritage and wildlife.

Magnificent Conwy Castle, described as 'One of the great fortresses of medieval Europe', is without doubt one of the most impressive of Welsh castles. The castle was was built on the site of an earlier Welsh monastery, founded by the Welsh prince Llewelyn Fawr. The present building was designed by the King Edward I's master architect-mason, James of St. George and was built between 1283-1289.Beaumaris Castle was built by King Edward I as part of his campaign to conquer North Wales. The castle was designed by Edward's military architect, James of St. George and was begun in 1295, but was never completed. The most technically perfect medieval castle in Britain.

Beaumaris Castle was the last and largest link in the chain of coastal fortresses built by the King Edward I to control his Welsh conquests. Beaumaris, along with the nearby castles of Harlech and Caernarfon, is a World Heritage Site.

Bluebells in the Gwydir Forest 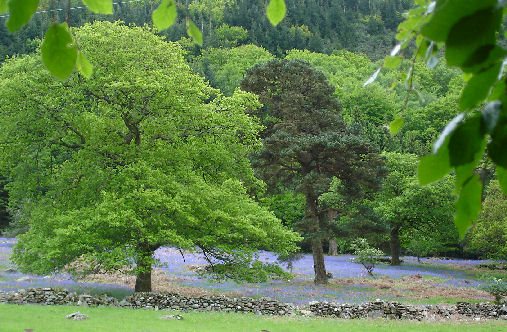 The national park offers the visitor some of the most spectacular scenery in Britain, from the soaring heights of Mount Snowdon, the highest mountain Wales, to the often mist shrouded Gwydir Forest and the stunning Swallow Falls. Snowdon, in Welsh, Yr Wyddfa, meaning 'the tumulus', dominates the landscape of North Wales, rising to 3,560 feet (1,085m) The Snowdon range consists of eleven peaks, three of which surpass 3,000 feet. Swallow Falls is the highest continuous waterfall in Wales. The falls are set on the River Llugwy two miles west of picture postcard town of Betws-y-Coed along the A5 to Capel Curig.

The Isle of Anglesey, which is also featured on this site, lies off the the north west coast of Wales near to the Snowdonia National Park. Two bridges span the Menai Strait, connecting the island to mainland Wales, the Menai Suspension Bridge which was designed by Thomas Telford in 1826 and the Britannia Bridge. The name Anglesey dates back to the tenth century and is of Old Norse origin, meaning 'Ongull's Island'. The island is known in Welsh as Ynys Môn, which derives from the British enisis mona, first appearing in the Roman era as 'Mona'.

This site is designed as a guide to the best Snowdonia and Anglesey has to offer the visitor and covers most of its castles, forests, mountains, villages and tourist attractions, providing all the information you require to plan a perfect holiday, or simply learn more about the area.