Llyn Trawsfynydd is the third largest body of water in Wales.

The reservoir was constructed in the 1920's to supply cooling water to the Trawsfynydd nuclear power station, which was used for the generation of electricity. Around two dozen properties were submerged to create the reservoir but there were few objections at the time. The power staion has now closed down and being decommissioned, but there is a visitor centre with conducted tours of the site.

The reservoir covers 1200 acres, a footbridge spans the narrowest part of the lake and there are views of the Rhinogs and Cadair Idris.

Fish stocks include wild native brown trout, rainbows, perch and rudd. Fishing Boats are available for hire and fishing permits and further details are obtainable from the newsagents in the village of Trawsfynydd. 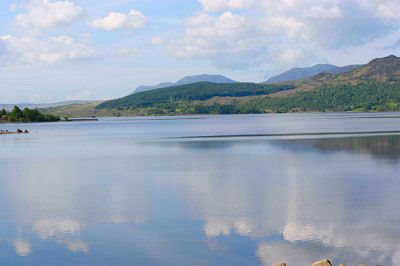 The village of Trwsfynydd has a high proportion of Welsh speakers (around 81.7%). It was the birthplace of to Saint John Roberts, one of the Forty Martyrs of England and Wales, who did much to aid plague sufferers in London. Saint John Roberts was found guilty of high treason during the reign of King James I and suffered the horrific fate of being hung, drawn and quartered on the 10th December 1610. He was canonised in 1970.