Ruggedly beautiful Ynys Llanddwyn or Llanddwyn Island is wreathed in legend. The name, pronunced hlanthwyn, translates into English as 'The church of St. Dwynwen'.

The island is technically a spit of land jutting out into Caernarfon Bay off Anglesey's south western tip and only really an island at the highest of high tides. Designated as an Area of Outstanding Natural Beauty, stunning views of Snowdonia and the Llyn Peninsula may be had from the island.

Dwynwen, who lived in the fifth century, is the Welsh patron saint of lovers, the equivalent of St. Valentine. Her Saint's day is 25th January and is often celebrated by the Welsh people with cards and flowers. 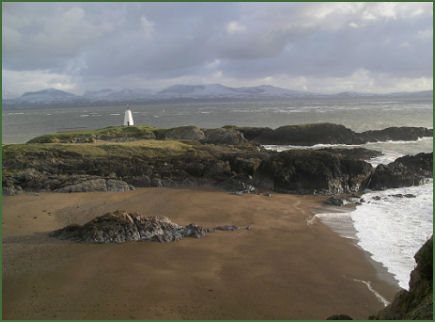 The ruins of St Dwynwen's Church are still standing today (pictured right) A cross near the ruins inscribed in Latin bears the date of Dwynwen's death, January 25th, 465. Her holy well from which she used to drink, Ffynnon Dwynwen, located just to the north of the chapel, became a place of pilgrimage for lovers and those seeking to find love. It can still be seen today.

Dwynwen built a stone church on Llanddwyn Island. Her shrine became a place of pilgrimage in medieval times when visitors would leave offerings. Dafydd ap Gwilym, the Welsh poet of the Troubadour tradition in the thirteenth century visited there, and wrote his poem about Dwynwen. The present chapel was built in the sixteenth century, occupying the site of Dwynwen's original chapel. 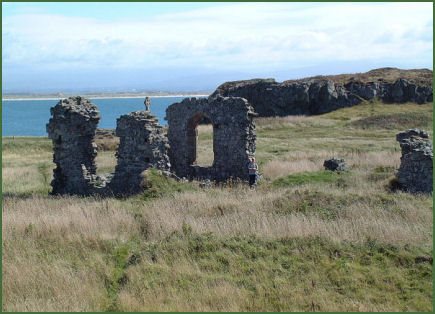 Dwynwen was one of 24 daughters of St. Brychan, a Welsh prince of Brycheiniog (Brecon) who was the son of an Irish king. The princess fell deeply in love with a young man named Maelon, but rejected his advances either because she wished to remain chaste and become a nun or because her father wished her to marry another. She prayed to be released from the unhappy attachment and dreamed that she was given a potion to do this. However, the potion turned Maelon to ice. She then prayed that she be granted three wishes, that Maelon be revived, that all true lovers find happiness, and that she should never again wish to be married. She travelled around Wales with her brother Dyfnan and sister Cain,  preaching and establishing many Christian churches. She then retreated to the solitude of Llanddwyn Island to establish a cell there and live a hermit's life. 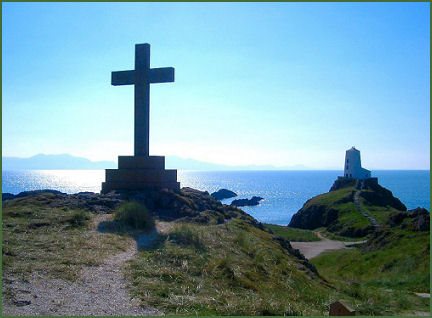 Several large rocks in the sand mark the approach to the island. Known as pillow lavas, they were formed by undersea volcanic eruptions; as the hot molten rock met the cold seawater a ballon-like skin was formed, which then filled with more lava, forming the characteristic pillow shape. They are also found in many other places around Anglesey.

At the end of the island there are two early nineteenth century towers, Twr Mawr (big tower) and Twr Bach (small tower), These were probably originally built as unlit markers for ships entering the Menai Strait. Near to the towers there stands a row of four pre-1830 two-roomed pilots' cottages, two of which, furnished as they would have been a century ago, now house an exhibition about the island. Tŵr Mawr is the island's lighthouse, it stands at 35 feet and was modelled on the windmills of Anglesey, it dates to 1845.

Llanddwyn Island is surrounded by a number of small, highly attractive cove beaches. There are more than 10 miles of footpaths crossing the island and Newborough Warren, including the Anglesey Coastal Path.