Carnedd Llywelyn soaring to a height of 1,064 metres (3,491 feet) is the highest mountain in the Carneddau massif and the third highest in Wales, surpassed only by Snowdon and its side-peak Carnedd Ugain..

Carnedd Llewelyn lies at the centre of the main north-east to south-west ridge of the Carneddau, between Carnedd Dafydd (1,040 metres/ 3,412 feet) which lies to the south-west and Foel Grach (976 metres/ 3,202 feet) which is situated to the north. A short subsidiary ridge links it to Yr Elen (962 metres / 3,158 feet) to the north-west. Carnedd Llywelyn's position means that any route to this summit involves a long walk.

The most popular ascent is from Llyn Ogwen, this route traverses the summit of Carnedd Dafydd. From the summit there are magnificent views to the Glyderau range and Snowdon to the south and on clear days it is possible to see Liverpool and the mountains of the Lake District. 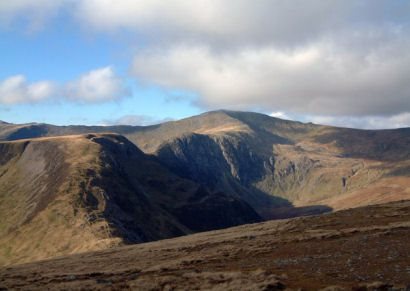 Though the summit, like that of many of the mountains in the southern Carneddau, is a flat, boulder-strewn plateau, the cliffs below the ridges are well-known rock climbs, notably Ysgolion Duon (meaning "black ladders") and Craig yr Ysfa.

A walk to the summit of Carnedd Llywelyn

*(1) Commencing from the car park at OS grid ref SH720715, (which is reached by turning west off B5106 at Ty'n y Groes and continuing through the village of Rowen to the end of the road) follow the Roman Road in a northwesterly towards Bwlch y Ddeufaen for around 500 metres. Turn left and follow the wall up a steep grassy slope which leads to a fence.

*(3) Descend and then ascend to Foel Grach. Carnedd Llewelyn is reached after a steep rocky incline opening up to a plateau and cairn on the summit. Retrace your steps to return

Obtain a reliable local weather forecast before you set off and plan a route suitable for forecast conditions.

Check your equipment before leaving, take waterproofs, spare warm clothing, hat and gloves. food and drink, a map, a compass and a survival bag.