Ceunant Mawr Waterfall, otherwise known as Llanberis Falls, is situated a few hundred metres upriver from the town centre of Llanberis. The falls are probably seen by more people from the viaduct on the Snowdon Mountain Railway.

Ceunant Mawr (which translates as the waterfall of the great ravine) is probably one of the most impressive waterfalls in Wales and plunges over a hundred feet in two stages into a gorge. 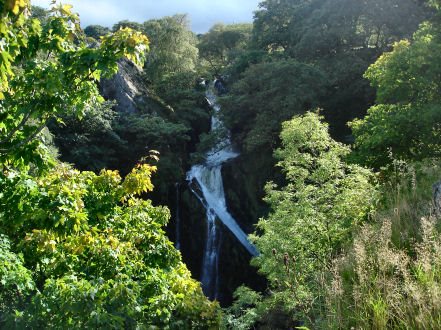 A walk to Ceunant Mawr Waterfall from Llanberis 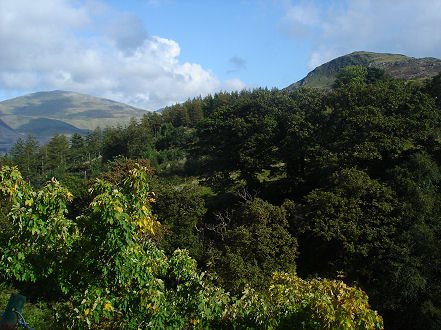 Distance - around one and a half miles

*Commencing at the forecourt of the Snowdon Mountain Railway Station (parking is avaiable opposite the station) in the centre of Llanberis, turn right, then take the first right turn.

*Proceed to the end of the road at which point turn right into a short road, and on reaching the end of the houses, take the public footpath to the left signposted Ceunant Mawr Waterfall.

*Follow the clear tarmac footpath which passes the viaduct and climbs steeply uphill and offers views over Llyn Padarn, Llanberis and the track of the Snowdon Mountain Railway as it begins its ascent up the mountain.

*The impressive waterfall can be viewed from an observation point which is reached by crossing the mountain railway track through a turnstile style gate positioned near the top of the hill.

*Retrace your steps to return to Llanberis.