The beautiful Dolgoch waterfalls are situated about 4km from the village of Bryncrug. They consist of a series of waterfalls which cascade down a rocky wooded ravine in the mountainside into a deep pool below.

The falls can be reached via a short walk, there are a number of caves on the route. Car parking and admission are free but there is a donation box which goes toward the upkeep of the footpaths. 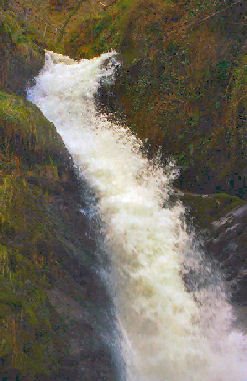 A walk to Dolgoch Falls

*From the lower falls, follow the ascending path that bears left, which eventually splits into two paths. At this point take the right fork and continue along the path by the river. Upon reaching the stone steps continue climbing up to the falls. Care should be exercised on the steps in wet weather.

To return Follow the path through the woodland until reaching a bridge, cross the river and continue along the path until reaching the lower falls, at which point join the main path and retrace your steps back to the Car Park.