Noted as one of the most beautiful gardens in Britain, Bodnant stands eight miles south of the town of Conwy and covers around eighty acres of the Conwy Valley. The garden is world famous for its botanical collections and have been described as a 'poem in greens'.

The gardens, which spread over the 80 acres surrounding Bodnant House, were begun in 1875. They were first laid out by Henry Davis Pochin, a successful industrial chemist, his daughter married the first Baron Aberconway in 1911, after which the gardens were tended by four generations of the local Aberconwy family. Bodnant is of interest to amateur and professional gardeners, artists, photographers and families alike. 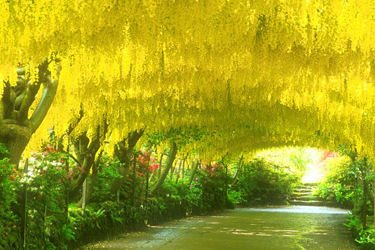 Bodnant Garden is formed of two parts. The upper garden around Bodnant Hall consists of the terraced gardens and informal lawns shaded by trees, with informal lawns, pools, rose gardens and Italianate terraces, . The terrace walls and pergolas are clothed with rare plants. On the canal terrace at one end of a long, narrow formal pool stands the Pin Mill, used as a garden house.

The lower portion, known as the "Dell" is formed by the valley of the River Hiraethlyn and contains the Wild garden. It hosts a superb collection of colourful rhododendrons of every imaginable hue, japanese azaleas and mature towering specimen trees, particularly conifers, many of them planted nearly a century ago and is a delight in the spring. 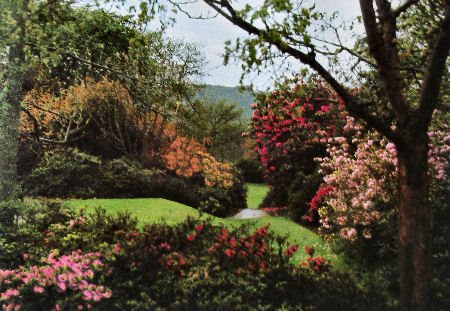 Bodnant Garden features an extensive and varied range of interesting and beautiful plants from all over the world, particularly China, North America, Europe and Japan that are suited to the Welsh climate and soil.

The famous fifty-five metre long Laburnum arch at Bodnant, is an overwhelming sight in June. Plants and shrubs provide a blaze of colour through Spring and Summer but Autumn is arguably the best time to view the garden.

Leading from the terrace there are walks lined with the colourful rhododendrons for which Bodnant is famous, with camellias and flowering trees. A minimum of two hours is required to fully fully appreciate the garden.

Bodnant has a Pavilion Tearoom, Art and Craft Studios and attached garden centre and the premises are disabled friendly. 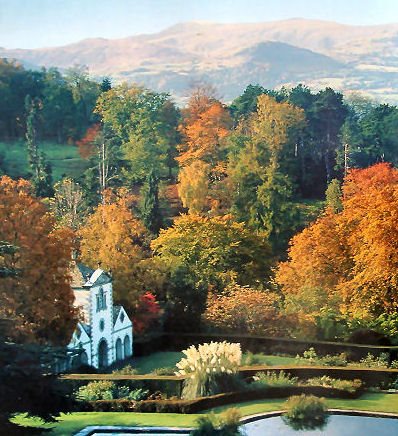 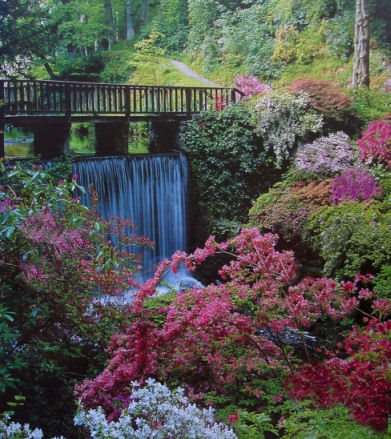