The historic town of Caernarfon, or Carnarvon as it is known in English, lies on the west end of the Menai Strait, it is traditionally the county town of Caernarfonshire. Caernarfon stands in a magnificent position at the foot of the mountains overlooking Anglesey.

The River Seiont at Caernarfon 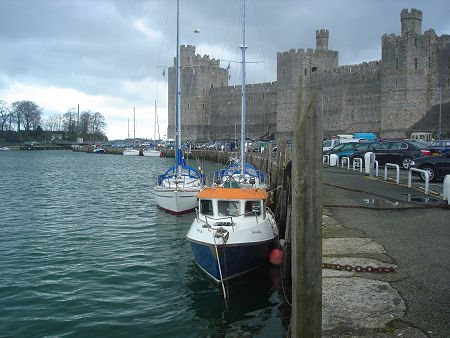 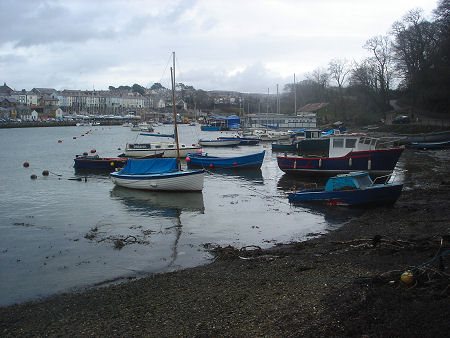 The name derives from the Welsh, Caer yn Arfon, meaning the Castle in Arfon, referring to the old Roman fort of Segontium. Little now remains of the fort but its foundations, there is a museum on the site,The Segontium Roman Museum which covers the history of the fort and related subjects. The impressive Segontium Roman Fort was an auxiliary fort constructed by the Romans in around 77A.D. Although it was a remote outpost, it is one of the most well known Roman sites in the country and attracts thousands of visitors each year.

One of Caernarfon's Characterful streets 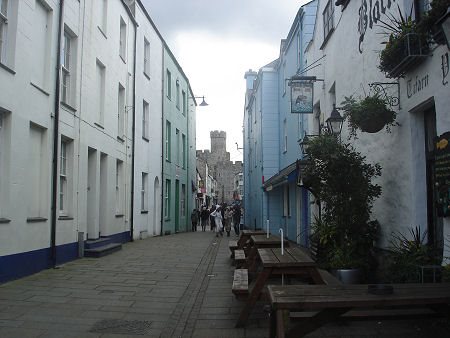 Caernarfon Castle dominates the town's main square, which is flanked on the other three sides by mainly Georgian buildings.  There are two statues displayed in the square, the one at the castle end is of bronze and commemorates Sir Hugh Owen, noted philanthropist and tireless worker for the establishment of primary, secondary, college and university education in Wales.  Nearby stands a further statue of Welsh born British Prime Minister, David Lloyd George, which was unveiled in 1921 by Billy Hughes, Prime Minister of Australia.

The town presents a variety of facilities for the visitor, including craft shops,  restaurants, a wide range of accommodation, a fun centre for children, a golf course and indoor swimming and sports facilities at the leisure centre. 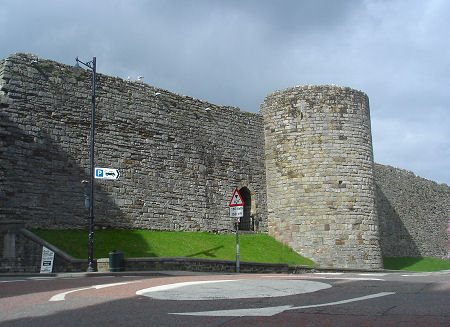 Caernarfon's medieval town walls date from the same era as the castle, work commenced on them in June, 1284. A shipping quay was built outside the walls fronting onto the Menai Strait. The walls circle the old town of Caernarfon, originally linking to the castle at both ends. The projection on the Eagle Tower was built in preparation for a great water gate, allowing access to the castle at high tide, but plans for its construction were later abandoned. The town walls are maintained by CADW. 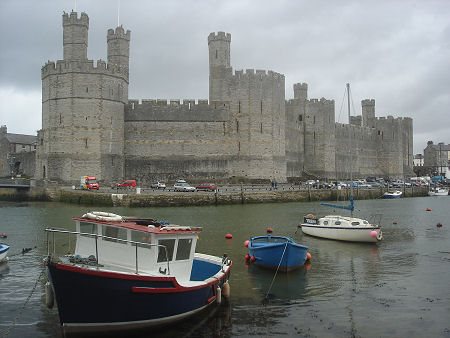 Magnificent Caernarfon Castle stands on the busy quayside at the mouth of the River Seiont. The castle was built by Edward I, after his conquest of Wales and can be fairly said to be one of the finest castles in Wales. Edward employed the services of his master mason James of St. George to design the castle.

Parts of the old Roman wall which once surrounded Caernarfon still survive. Nearby Foryd Bay offers excellent opportunities for birdwatching. The famous Welsh Highland Railway runs from Caernarfon to Dinas, Waunfawr and Rhyd Ddu at the southern foot of Mount Snowdon.

Caernarfon has a Saturday market, its population are largely Welsh speaking (92%) and the local dialect is distinctive and barely intelligible, even to other Welsh speakers.