Dolbadarn Castle is fairly regarded as one of the finest remaining castles of the native Welsh Princes. The castle stands on a rocky hill some eighty feet above Llyn Padarn and Llyn Peris in the Llanberis Pass and is listed as a World Heritage Site.

Constructed by the legendary Llywellyn the Great (Llywellyn ap Iorwerth) before 1230 to guard the main route through the Snowdonia mountain ranges, its position at the tip of Llyn Padarn allowed the garrison to blockade any movement through that part of the north. The castle predates the English castles built by Edward I following his conquest of Wales. 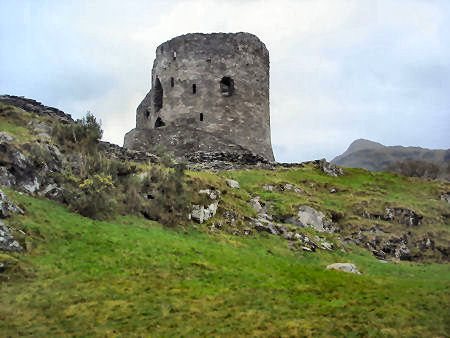 The 40' round tower built of slate and rubble, built on a rocky outcrop, once rose to three stories and houses a complex series of chambers. Inside the curtain wall stood a hall and a second tower. The round tower measures 40 feet high, is 40 feet in diameter, and possesses walls which are eight feet thick. 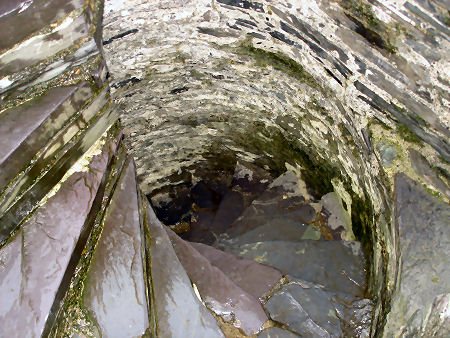 Dolbadarn Castle's first floor entrance was originally via a timber stair, the doorway of which was once defended by a portcullis and heavy bars.

All traces of the interior floors have long since disappeared, victims of the neglect and pilfering which has taken place over the centuries, but beam holes to support the two main floor levels can still clearly be detected in the ruins of the tower. Both chambers possessed fireplaces.

The basement would once have been accessed by a ladder through means of a trapdoor. The battlements, from which there are excellent views of Llyn Padarn and the Llanberis Pass, can be reached by the unusual spiral stone staircase within the tower. 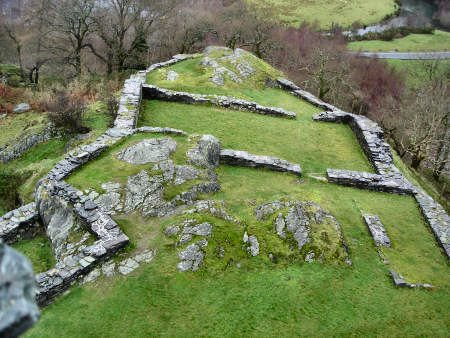 wall and a large rectangular hall at the northern end of the site. There remain two open hearths inside where the hall once stood.

The castle remained inhabited after the demise of Llywelyn the Great in 1240 and according to John Leland, an Antiquarian who lived during the reign of Henry VIII, was used for the imprisonment of Owain ap Gruffydd by his younger brother Llywelyn the Last during their struggles for control of North Wales in the 1250's. The unfortunate Owain spent 20 years as a prisoner living on the upper floor of the castle.

In 1282 Dolbadarn was captured by English armies led by the Earl of Pembroke, and was abandoned two years later, its timber used by the English for the construction of Caernarfon castle, after which it gradually fell into decay.

There is no charge for entry to the castle.

Dolbadarn Castle can be accessed from the south east end of the Llanberis Pass on the east side of the main A4086 road, the turn off is situated almost opposite the Snowdon Mountain Railway.