Aran Fawddwy which rises to a height of 905 metres (2, 790 feet) is the highest Welsh mountain south of Snowdon.

Aran Fawddwy is the principal summit of the predominant southwest-northeast ridge between Dolgellau and Bala, southern Snowdonia, a ridge that continues westwards as Cadair Idris. On the eastern slopes of Aran Fawddwy is the small lake named Creiglyn Dyfi, which is the source of the River Dyfi, which meanders through to the sea at the resort of Aberdyfi (Aberdovey).

On a clear day the views from the summit are superb and take in Cader Idris, Mount Snowdon, the Berwyn mountains and Plynlimon. Most walkers start out from the car park in Cwm Cywarch and ascend via Hengwm and Drws Bach. 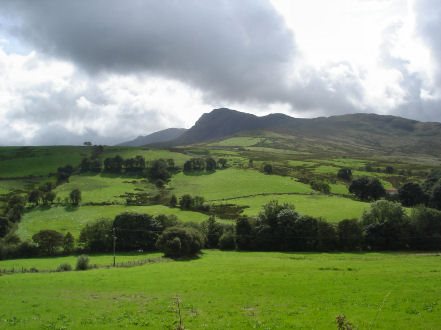 The route to the summit of Aran Fawddwy

*Commencing at the car park at the village of Llanuwchllyn at Lake Bala and proceed south along the obvious track. Follow the path for around 100 feet and after passing the path leading to Garth Isaf turn right onto the main Aran ridge path.

*The path ascends and crosses a a wall, then follows along a wall on the left to cross another wall onto open moorland. Turn left as the path begins to drop towards Cefn-gwyn and proceed toward the centre of the wall in front of you. Once across this wall it provides a guide on your right for most of the ascent to Aran Benllyn. 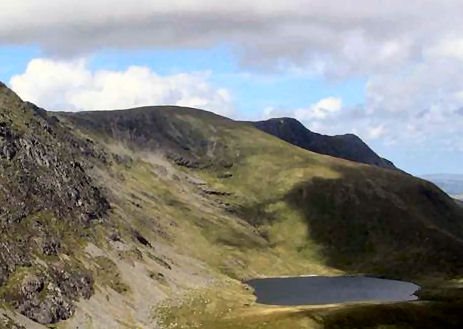 *Continue to the cairn on top of Moel Ddu, where the path joins the main ridge. Beyond Moel Ddu the path crosses to the other side of the wall as you approach Craig y Llyn and a steep drop to Llyn Lliwbran. The path continues up the final stretch to the summit of Aran Benllyn.

*Descend to the col between Aran Benllyn and Erw y Ddafad Ddu, crossing the wall that runs along the ridge to take in the summit of Erw y Ddafad ddu, the lowest of the three Aran Ridge summits. Recross the wall to rejoin the main path and continue up the last 100ft climb to Aran Fawddwy

.*Retrace your steps to return to the car park at LLanuwchllyn.