The dramatic Grey Mare's Tail Waterfall, known in Welsh by the seldom used name of Rhaeadr y Parc Mawr, is situated in a beautiful wooded glade at Coed Felin Blwm, the Lead Mill Wood, near to the market town of Llanrwst.

The waterfall is situated on the eastern edge of the dense and extensive Gwydir Forest, which covers 7,250 ha and was established in 1921 by the Forestry Commision. The fall is fed by a wide stream which has its source in the forest and flows on to join the River Conway further down. The waterfall actually consists of two falls, which drop into a plunge pool beneath.

The remains of disused mill buildings may be seen near the waterfall. Felin Blwm lead mill was originally built by the wealthy and influential Wynn family of nearby Gwydir Castle to crush ore from Parc Mine in the Gwydir Forest 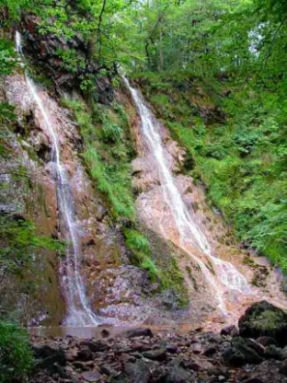 The area around the falls now serves as a Nature Reserve and is owned by the Forestry Commision. There is a very pleasant walk from Llanrwst to the waterfall which takes in the village of Llanrychwyn, the characterful village church, which dates to the eleventh century, is reputed to be the oldest in Wales, the church has no electricity and is known locally as Llewelyn's Church in honour of Llywelyn ap Iorwerth, otherwise known as Llywelyn the Great. Prince Llywelyn owned a hunting lodge at nearby Trefriw, and along with his wife Joan, who was the illegitimate daughter of King John of England, would often climb the steep slope up to Llanrhychwyn church.

A walk to the Grey Mare's Tail Waterfall from Llanrwst

*Commencing at the railway station at Llanrwst, cross the road to the road juction, turn right opposite a telephone box and proceed to the Gower Suspension Bridge which crosses the Afon Conway. Follow the footpath to Trefriw and turn left at the T junction on the B5106.

* Upon reaching a school. turn uphill and follow the road. 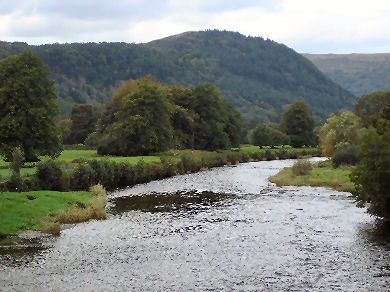 *On reaching a T junction at a house named Tyr Bont turn left and follow the steeply ascending road to the village of Llanrhychwyn, which boasts an eleventh century church, reputed to be one of the oldest in Wales and well worth a visit.

*At the crossroads at Llanrychwyn continue along the lane signposted Llanrwst which descends into the forest which offers some superb views of the Conwy Valley.

*A steeply ascending section of the lane will bring you to a stile on the left. Cross over the stile and follow the track to the Grey Mares Tail Waterfall.

*Follow the track to arrive at a Forestry Commision car park, exit the car park and turn right. Follow the road to the road junction marked Llanrwst and Betws y Coed. Follow the signs down into Llanrwst, passing creeper covered Tu Hwnt ir Bont and cross the bridge over the Afon Conwy to return to the station.