Llyn Padarn, a site of Special Scientific Interest, is situated in the Llanberis Pass and nestles below Mount Snowdon, Wales' highest mountain. 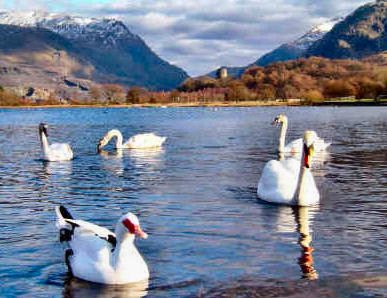 The beautiful and extensive Padarn Country Park, at the south-eastern end of the lake, covers an area of 800 acres. There are a number of lakeside picnic areas and the park includes Coed Allt Wen, a rare and ancient oak woodland, where there are some superb scenic walks.

The park offers the visitor a variety of themed trails, including a five mile trail around Llyn Padarn, and shorter Nature Trails amongst the woodland, as well as an interesting Industrial Archaeological trail centred around the Vivian Quarry. 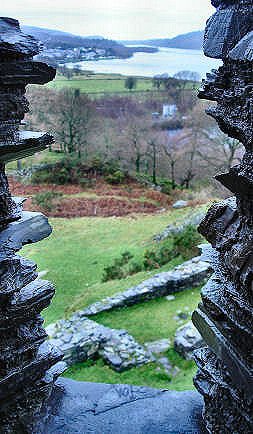 Dolbadarn Castle built by Llywellyn the Great and regarded as one of the finest remaining castles of the native Welsh Princes can be seen across the lake. The castle is listed as a World Heritage Site. Constructed before 1230 to guard the main route through the mountain ranges, the 40' round tower built of slate and rubble once rose to three stories and houses a complex series of chambers. Inside the curtain wall stood a hall and a second tower. After the conquest of Wales by Edward I the castle fell into disuse and decay.

Llyn Padarn is also a highly popular spot for canoeing, boating and fishing. Day permits for fishing can be obtained from the local angling association.

The Dinorwig Quarry Hospital is now an interesting museum which houses some of the original equipment dating from the 1800's. The hospital was constructed in the mid nineteenth century for the workers oat the Dinorwig quarry, which closed in the 1960s. Accidents at the quarry occurred frequently and the workers paid a small amount from their wages to maintain the hospital.

The Llanberis Lake Railway, which was opened in May, 1971, is a narrow gauge heritage railway, which runs for two and a half miles on a sixty minute trip along the northern bank of the lake. The railway is built on the track bed of part of the 4 feet gauge Padarn Railway, which from 1843 to 1961 carried slates from Dinorwic Quarry, Llanberis, to Port Dinorwic on the Menai Strait.

The fascinating Welsh Slate Museum was first opened in 1972 as part of the National Museum of Wales. It is housed in the Victorian workshops built in the shadow of Elidir mountain, site of the vast Dinorwig quarry.

A walk at Padarn Country Park

*Starting from the far end of the Padarn Country Park car park, ascend the steps to the Quarry Hospital and turn left. . Keep to the left by green marker.

*The path climbs steeply and then descends, Once the path starts to descend, keep to the right fork, passing through the kissing gate and over the slate bridge. Take the first kissing gate on the right.

The track traverses some rocky streambeds before crossing the river by a wooden footbridge and via a steep climb, leads you back into the Park through a gate. Take the next two left forks, and follow a path on the right which drops down over a steep style.

Turn right following the narrow path along a low wall until it meets another path at the base of steps. Turn right at this point and then keeping to the left by the side of the Vivian Quarry follow a series of steps down the various galleries where you can see the remains of the winding houses. Upon reaching the road, turn left and then almost immediately right through a small gap in a wall to return to the car park.