The Coedydd Aber Nature Reserve near the village of Abergwyngregyn occupies a steep sided wooded valley of great scenic appeal which is situated between the Snowdonian mountains and the North Wales coast.

The single barrel vault bridge of Bont Newydd spans the Afon Aber Garth Celyn, its date of construction is not known, but it is known to have existed prior to 1822, as it is marked on a map from that date. Large stones in the river under the bridge mark the site of an earlier ford. The woodland around Bont Newydd ('the new bridge'), near the car park is mainly deciduous and consists of alder, oak, ash, hazel, blackthorn, willow and birch. In spring wildflowers such as the primrose, wood sorrel, wood anemone and bluebell clothe the woodland floor. Parts of the woodland are managed by the Forestry Commision. 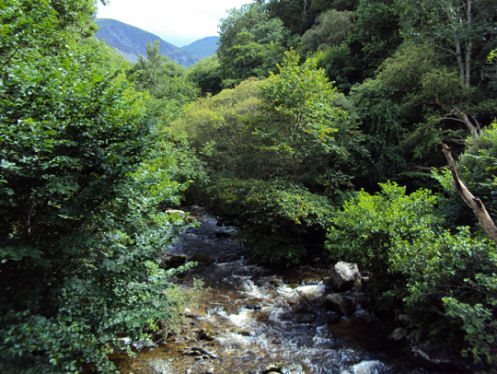 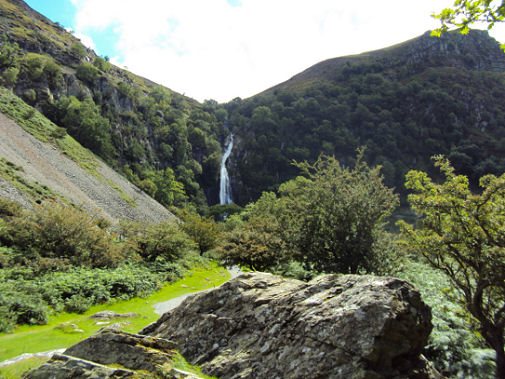 The site is home to many species of birds and is paticularly beautiful in the spring when the woodland floor is clothed with a carpet of colourful bluebells. There is a range of nesting birds, including raven and peregrine falcon on the cliffs, tree pipit and redstart along the woodland edge, and pied flycatcher, green and great spotted woodpeckers, nuthatches, tree creepers and great, blue and coal tits and wood warbler in the Oak woods. The grey wagtail, yellow and grey in colour, is frequently to be seen by the river, where it also breeds. Dippers may also be sighted, the dipper is a plump, stump-tailed, solitary bird, with dark plumage and a white throat. Dippers occupy the same stretch of stream for most of the year and have the astonishing ability to plunge beneath the water and walk along the stream-bed totally submerged. 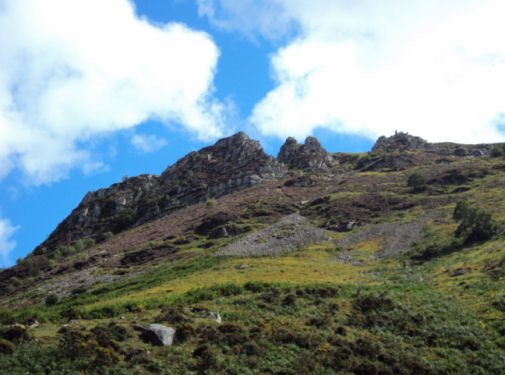 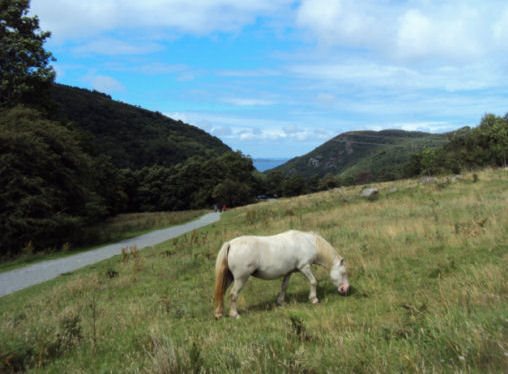 Beside the main path leading to Rhaeadr Fawr (which translates as the big waterfall), are the outbuildings of the Bwthyn y Nant smallholding, one of these hosts a small exhibition about the valley. The Aber Valley was once the site of the Palace and Court of Llywelyn ap Gruffudd, Prince of Wales.

The reserve contains many historic and archaeological monuments, including round and long huts, cairns, a medieval hafod and an iron age hill fort testifying to the long history of human occupation in the area. Excavations are underway on the site of an Iron Age Roundhouse and Medieval grain drying kiln on the Nature Reserve. It has been discovered that wheat, barley and oats were once dried in the kiln. A quern (a grinding stone) has been found, used to make flour from grain in the Iron Age. 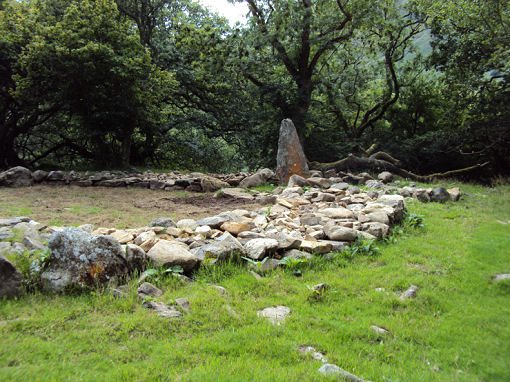 Other finds on the site include wool spinning weights, stone beads and flint tools. Burnt bone in a pit beneath the floor may indicate a human cremation.

One of the most majestic sights of the Welsh mountains is Rhaeadr Fawr or Aber Falls as it is known in English. The waterfall can be accessed via a walk from the car park at the reserve.

The reserve can be accessed from a car park at Bont Newydd Bridge, off the lane heading inland from the village of Abergwyngregyn.

A walk to Aber falls

*(1) Commencing at the car park at Bont Newydd up the narrow road from Abergwyngregyn, follow the signs leading through a small area of woodland. 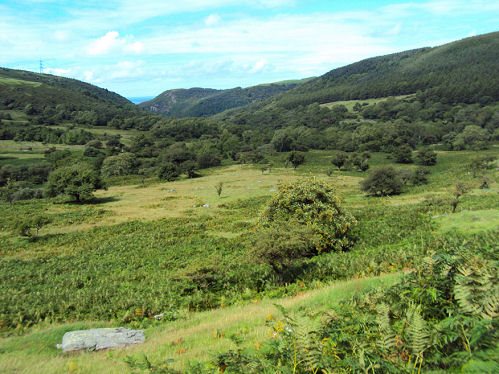 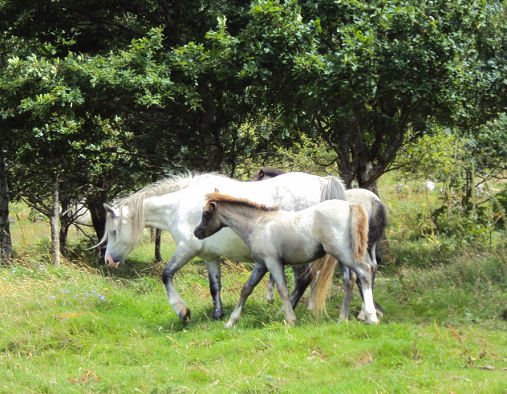 *(3) After seeing Rhaeadr Fawr, either retrace your steps to return to the car park or take the track leading off to your right to walk the short distance to the further waterfall of Rhaeadr Fach.