Nineteenth century Penrhyn Castle, around a mile to the east of Bangor, was once the home of the Pennant family and is now owned by the National Trust. The house commands a superb position overlooking the Menai Strait.

An excellent example of neo-Norman architecture, the 'castle' was designed by the architect Thomas Hopper, and built in 1820 for George Hay Dawkins Pennant from the profits of Welsh slate and Jamaican sugar. The Pennant family owned the slate quarries at nearby Bethesda and slate has been used extensively in the construction of the building. The ostentatious cathedral like interior design of the building reflects the wealth of the Pennant family. 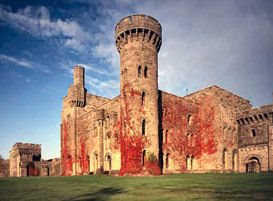 The massive front door leads into a long low vaulted corridor which in turn leads to the dramatic grand hall, which rises the whole height of the house and boasts a stone Norman style vault. The main staircase, which took ten years to build, has flights of stone steps leading through richly ornamented stone arches. The house contains much superb plasterwork, wood and stone carving and some fine furniture. 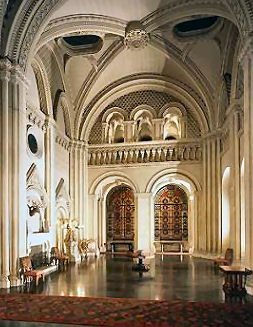 Queen Victoria once slept in the one ton slate bed in the state bedroom when she stayed at Penrhyn in 1859. The house also houses a doll museum. The walled garden is home to many tropical plants including palms, maidenhair trees, jasminium climbers and Chinese gooseberries.

The 45 acres of grounds, with paths accessible to wheelchair users, have views over the Menai Strait and Snowdonia. The estate also hosts an industrial railway museum and an adventure playground.