Situated north of Blaenau Ffestiniog, and 5 miles south west of the village of Betws-y-Coed, Dolwyddelan Castle stands proudly upon a crag which dominates its surroundings, and is set against the rugged backdrop of dramatic Moel Siabod.

The castle was founded by Iorwerth Trwydwn in around 1170. Dolwyddelan consists of two rectangular towers connected by a curtain wall. The keep and the curtain wall are said to have been built by Llywelyn ap Iorwerth. The views of the surrounding landscape from the top of the tower are spectacular.

Dolwyddelan Castle is reputed to be the the birthplace of the renowned Llywelyn the Great, otherwise known as Llywelyn ap Iorwerth, who was born circa 1173, however, it seems highly unlikely that the castle even existed at this time. Archaeological excavations have unearthed the remains of an older castle which stands in the valley below Dolwyddelan. Situated on a small rocky knoll, and known as Tomen Castell, it is more likely that this is Llywelyn's birthplace. Today the mound or motte is covered with trees and vegetation but traces of a rectangular tower are discernable on the summit. 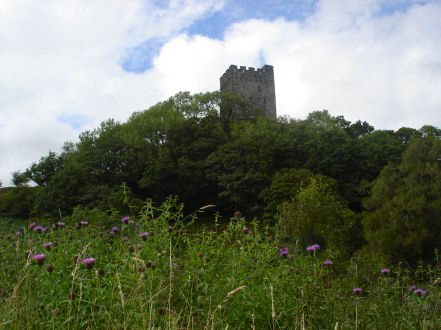 Dolwyddelan Castle itself , was most probably built by Llwelyn the Great in the early part of the thirteenth century to guard the road into the heartland of his domain. The castle is defended by rock-cut ditches and sits upon a a steep hill, it is dominated by a strong rectangular keep-tower, which was later heightened to three stories.

Dolwyddelan Castle remained an important stronghold for Llywelyn's grandson and successor, Llywelyn ap Gruffydd. The stark, square tower controlled a strategic pass from Merioneth to the Vale of Conway. A stone curtain wall, enclosing a courtyard was added to the original keep in the thirteenth century. 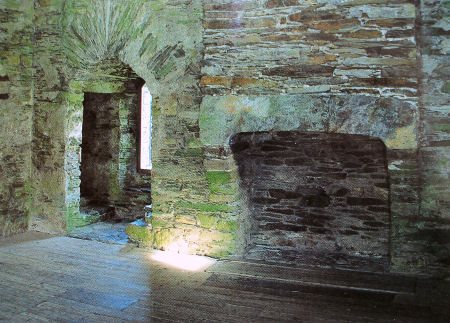 The castle fell to the invading forces of Edward I in 1283, and was restored, the second tower, which today stands in ruins, was probably added then. The fall of Dolwyddelan Castle marked a turning point of Edward's Welsh campaign, allowing the English army into the heartlands of Snowdonia.

The Welsh built castle became a link in Edwards famous chain of strongholds around Gwynedd. English forces occupied the castle until 1290, when it eventually became irrelevant as the inland castle did not fit in with Edward's long term strategy of supplying his fortresses from the sea.

By 1500, Dolwyddelan Castle had fallen into decay, but was repaired in the nineteenth century by Lord Willoughby de Eresby. The distinctive battlements and projecting drains date from the time of this restoration.

Dolwyddelan Castle is now in the care of CADW, on site parking is provided and there is a site exhibition.

The nearby attractive village of Dolwyddelan, east of the castle, sits in a magnificent landscape of pine clad hills. The main street, which runs parallel to the River Lledr is dominated by a huge Victorian style chapel. The village was once a centre for the local slate mining industry and contains one of the most attractive small churches in North Wales, which is dedicated to a seventh century missionary from Ireland, St. Gwyddelan. The building dates to the sixteenth century and contains what is reputed to be the saint's bell.