Llangelynnin Church, a building of much character, is one of the oldest churches in Wales, dedicated to the sixth century St. Celynin, who is reputed to have founded the first religious settlement on the site, the church occupies a remote position near the village of Henryd, situated in an isolated position high in the hills of the Conwy Valley.

St. Celynin was reputed to be the son of Helig ap Glanawg, a prince who was said to reside at Llys Helig before the sea flooded the land off the coast of Penmaenmawr. Tradition states that he was related to Rhun, the son of Maelgwn Gwynedd, Prince of Gwynedd, who is recorded as living in the sixth century, and that he was also a brother to Rhychwyn, the saint who founded nearby Llanrhychwyn church, which is reputed to be the oldest church in Wales. 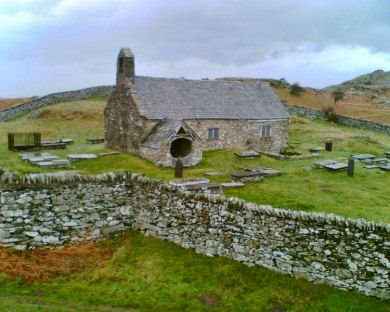 Llangelynnin parish no longer exists but the name survives in the church and the school at the vilage of Henryd.

Llangelynnin Church probably dates back to the twelfth century, the church at the nearby hamlet of Llanrychwyn is therefore of greater antiquity. Llangelynnin Church probably occupies the site of an earlier wattle and daub church. The porch is a later addition and dates to the fifteenth century, it features a curious "squint window" in its east wall. The door hinges and threshold are of fourteenth century construction, although the door itself is more recent.

The twisted altar rails and the altar screen are of seventeenth century origin. When the pulpit to the left of the altar was removed, inscriptions on the east wall were revealed. The careful removal of a coat of whitewash revealed wall paintings including the Creed, the Lord's Prayer and the Ten Commandments, which were written in Welsh. The inscription "Fear God and honour the King", together with scrollwork, are still clearly visible today, as are a rendition of a skull and cross-bones. The Welsh version of the Lord's Prayer, has been sadly damaged as a result of vandalism.

The remains of the rood screen date from the fourteenth century. The building formerly possessed a rood loft and gallery, the remains of these can be discerned on the nave walls, and from the beam at the back of the church. 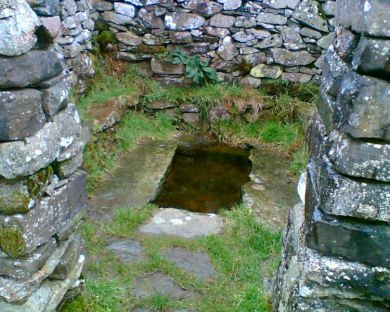 The walled churchyard contains medieval gravestones dating back as far as the fourteenth century. Inscriptions can bbe found in Welsh and English.

A holy well is situated in the south-eastern corner of the churchyard, known as Ffynnon Gelynin and referred to as the Holy Well of St. Celynin, it consists of a small, walled, oblong shaped pool, which was once possessed a roof, the roof is believed to have been added in the sixteenth century. The well itself, which predates the church building, was renowned in the area for its power to cure sick children. The parents of sick children would visit the well to throw items of their childs clothing into the water. It was believed that if the clothes floated their child would survive. If they sank the child was destined to die of their illness.

The remains of an ancient hut circle lie next to the church, which tradition states was where St. Celynnin lived. An Iron Age fort is situated on the nearby crags of Cerrig-y-ddinas.

Major renovation work on the building was carried out in 1932 and in 1987 The church is open to visitors 10am-5pm on Saturdays and 2pm-4pm on Sundays.

A walk to Llangelynnin Church from Conwy

*Starting from Lancaster Square in Conwy, proceed uphill and take the first left turn, passing through the arch in the Medieval town walls, then take the next left turn. On reaching a junction turn right to Hendre and Groesffordd. Go straight on and follow the steeply ascending lane.

*Upon reaching a signpost for Llangelynnin Church at a junction, turn left, the church will come into sight on the left. Cross over a stile on the left and proceed across the field to reach a further stile, which openss out onto a lane. Turn left to reach the churchyard.