The pleasant village of Llanystumdwy lies two miles west of Criccieth. The name translates as 'church at the bend in the river'.

David Lloyd George (1863- 1945), who was to become one of the twentieth century's most able politicians, grew up in the village and is buried there. Lloyd George was born in Manchester in 1863, but following the death of his father when he was but one year old, his mother moved to Llanystumdwy to live with his uncle, the local shoemaker. He became Liberal M.P. for Caernarfon at the age of 27, Chancellor of the Exchequer at 45 and Prime Minister at 53. In 1944, he retired to his boyhood home and bought a farm there. 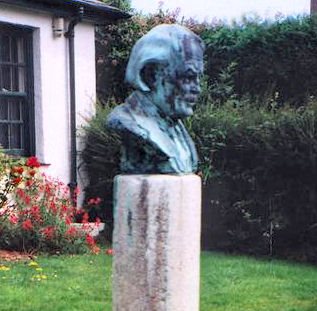 The stone cottage that was his home until 1890 stands on the main Criccieth- Pwllheli road and is marked with a plaque. Beside the cottage stands the wooden building where his uncle worked and the local liberals discussed politics. The ancient bridge that spans the River Dwyfor at Llanstumdwy was a favourite haunt of the young Lloyd George, and where he carved his initials.

Lloyd George's grave, which consists of a great boulder, inscribed with simply his initials, is set on a wooded bank above the River Dwyfor and was designed by the Portmeirion architect, Sir Clough Williams-Ellis.

The village is home to the Lloyd George Museum which is filled with momentoes of his fifty year career in the House of Commons, outside the museum stands a striking bronze bust of him in later life. Exhibits include an interesting film about Lloyd George's life. As well as a Victorian schoolroom exhibit, a library, talking head, internet access point and on-site shop. Included in the Lloyd George collection of archives contained at the museum are caskets and scrolls presented to him when he was Prime Minister, and various documents, including the Versailles Treaty signed by him at the end of the First World War. 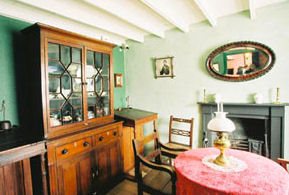 The museum garden, which had become a jungle of weeds and brambles following years of neglect, has now been lovingly restored in its former Victorian style.

Easter, May -- October, and at other times by appointment.