The Carneddau range of mountains encompasses a number of lakes in its deep valleys including bleak and treeless Llyn Cowlyd.

The lake is actually a reservoir providing water for the towns of Conway and Colwyn Bay and has a 30' dam at its north east end. Llyn Cowlyd is the deepest lake in Wales at 229 feet (70 metres) at its deepest point, measures two miles long by a third of a mile wide and lies at a height of of 1,164 feet (355 m) above sea level. The lake is home to Artic Char, a relic of the Ice Age, which was originally taken from Llyn Peris, in the Llanberis Pass, when that lake was drained during the construction of the Dinorwig Power Station. 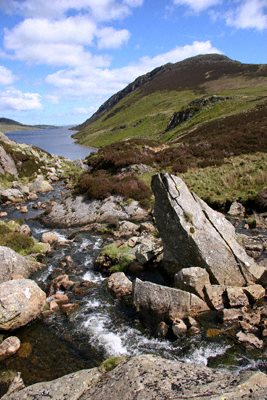 According to 'The Mabinogion, an ancient Celtic text, carried down by oral tradition and written down in the fourteenth century Red Book of Hergest, the area was once rich in wildlife. In the story of Culhwch and Olwen, the giant Ysbaddaden sets Culhwch some difficult tasks in order to win the hand of his daughter Olwen in marriage. Culhwch enlists the aid of his cousin, King Arthur, to seek the lost Mabon, son of Modron, a number of mythical beasts are consulted, one of whom is the Owl of Cwm Cowlyd. The owl relates the history of the cwm, confirming that the valley was once wooded, but that the first clearing took place much earlier than mediaeval times.

Llyn Cowlyd can be accesed by road from Trefriw. The road, however, stops at a gate, which is about a mile from the lake itself, private vehicles are not permitted beyond the gate.

A walk to Llyn Cowlyd from Capel Curig

*Commencing at the car park at Capel Curig, cross the road and follow the signed path, which leads through a valley with Clogwyn Mawr to left and the Pinnacle the right. The path ascends arriving at a junction of paths, take the left hand fork to climb to a col to the east of Crimpiau.

*Take the path cutting back and uphill on the left. The track first follows the wall before ascending to the summit of Crimpiau. Descend to the north west from Crimpiau to reach the col below Craig Wen. From here the route follows the ridge north to reach the highest summit of Creigiau Gleision.

*Follow the ridge north, descending to arrive at a col before ascending again to the north summit. Descend from the north summit to reach a fence, cross over the fence and turn right. following the boundary as it heads in a northeastly direction. At the the first fence junction turn north. Continue in this directiom until arriving at a cross path leading northwest down to the dam at the head of Llyn Cowlyd.

*Cross over the dam and on the far bank turn left along the first path and proceed along this path to join a wider path. Continue along this path along the lake to Bwlch Cowlyd and a junction. Turn left and cross the leat to descend to the A5 a kilometre north of Capel Curig. Turn south onto the main road to return to Capel Curig.