Bleak Llyn Eigiau lies in a glaciated valley on the edge of the Carneddau mountain range. Situated a mile to the north of Llyn Cowlyd, the lake covers an area of about 120 acres (0.49 km2), and is around 32 feet deep (9.8 metres).

A 35 feet high dam was constructed at the eastern end of Llyn Eigiau in 1911 to supply water for the Dolgarrog power station. Due to alleged corner cutting, the original contractor abandoned work on the dam. The lake was the scene of a terrible disaster in 1925, following 26 inches of rain in just five days, the dam burst on 2nd November, 1925. The water flooded down to Coedty reservoir, which also burst, causing millions of gallons of water to flow down onto the village of Dolgarrog, which demolished the aluminium works and a row of cottages, in which seventeen people were consequently killed. A new power station was constructed at Dolgarrog in 1925. The dam now stands high and dry above the lake, an examination of its structure reveals that the foundations were insufficient. 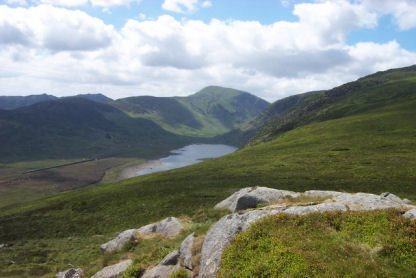 Historically known as Llynyga, the name Eigiau is the thought to derive from the abundant shoals of fish that once occupied the lake. There are thought to be a small number of Artic char still living in the lake, which were transferred from Llyn Peris, Llyn Eigiau is one of the few lakes in Wales to have its own naturally occuring brown trout.

There is a car park within walking distance of the lake, which lies about half a mile from the dam.

A walk to Foel Grach from Llyn Eigiau

Commencing at the car park at grid ref-grid ref SH731662, which can be accessed by road from the B5106 at Tal-y-bont in the Conwy Valley, proceed south west along the track to reach Llyn Eigiau. Remain on the track, passing the old mine workings at Cwm Eigiau.

* continue in a northerly direction ascending the mountain track to arrive at the summit of Foel Grach from which the views are superb.