The ancient Welsh market town of Llanrwst lies in a superb setting between steeply rising hills in the beautiful Conwy Valley. 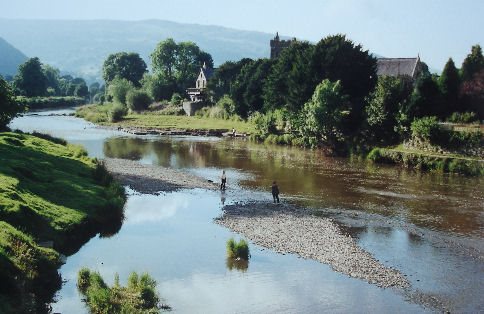 The town derives its name from the seventh century St. Grwst, a missionary who settled in the Conwy Valley. The highly picturesque tiple arched bridge, known as Pont Fawr, which spans the River Conwy is reputed to have been built by the famous Inigo Jones and dates from 1636, although originally constructed for horse drawn carriages, the bridge still carries modern traffic and is a major artery into the town. It was commisioned by the Wynn family, owners of Gwydir Castle. The picturesque creeper covered cottage next to the bridge, known as Tu Hwnt i'r Bont , dates from the fifteenth century and was once the local courthouse. Now owned by the National Trust, it operates as a tea room and shop. 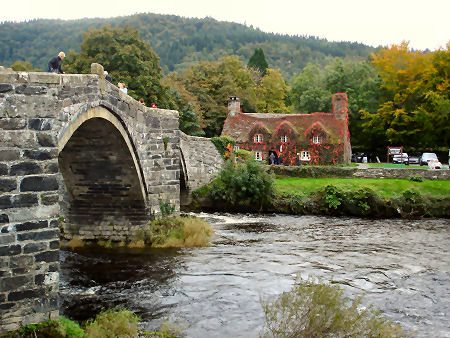 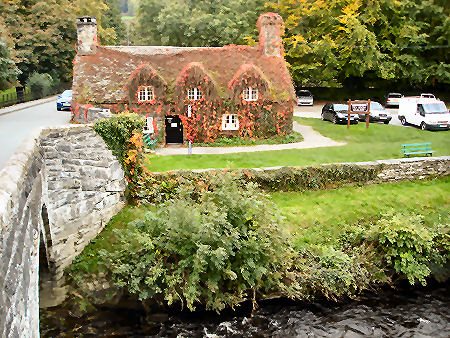 Gwydir Castle, on the opposite bank of the river is a Tudor Courtyard House, being built in 1500 it boasts ten acres of gardens. The town's historic almshouses date from 1610 and were built by John Wynn of Gwydir to house the poor of the parish. The almshouses closed in 1976 but were restored in 1996 with aid from the Heritage Lottery Fund and opened as a museum of local history. The museum consists of two period style rooms and holds exhibits relating to the Conwy Valley, with several items associated with the Llanrwst Bards of the nineteenth century. A working herb garden is situated in the grounds. 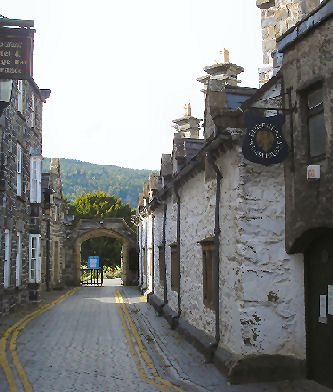 The Almshouses from the Churchyard

There is a pleasant walk from the town to the nearby Grey Mares Tail Waterfall, which lies on the edge of the Gwydir Forest.

The Church of St. Grwst is an interesting Grade I Listed Building, its elaborate rood screen, a relic of Cistercian Maenan Abbey, is intricately and painstakingly carved. the church occupies the site of St. Grwst's original sixth century cell. 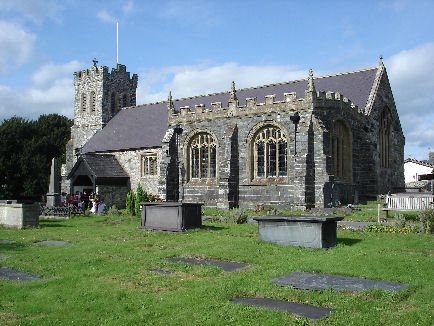 The church was originally built in 1170, by Rhun ap Nefydd Hardd to expiate his father's sin in murdering Idwal, the son of Owain Gwynedd. The building suffered damage during the rebellion of Owain Glyndwr and was completely burnt down in 1468, during the Wars of the Roses, when the town was sacked by the Yorkist commander, William Herbert, Earl of Pembroke, in retribution for the burning of the Yorkist garrison at Denbigh. The church was rebuilt two years later. 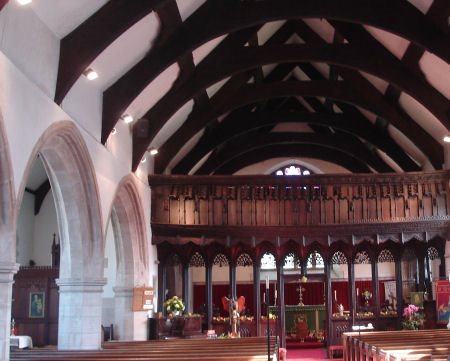 The Gwydir Chapel, also said to have been designed by Inigo Jones, was commisioned in 1636 by Sir Richard Wynn, son of John. Sir Richard was treasurer to Queen Henrietta Maria, wife of the ill fated King Charles I.

The chapel has some fine wood panelling , an elaborately carved Reniassance style wooden ceiling and contains a stone sarcophagus said to have been that of the great Welsh hero, Llywelyn ab Iorwerth, (Llywelyn the Great) who died in 1240 and was interred at Aberconwy Abbey, which he himself had founded in 1184. The sarcophogus was later taken to Maenan Abbey and at the Dissolution of the Monasteries in the reign of Henry VIII and came to rest at the Chapel. The empty coffin is draped with Llywelyn's quartered standard of red and yellow lions rampant. The coffin of Llywelyn's wife, Joan, the daughter of King John of England is simiarly displayed at the church of St. mary and St Nicholas in Beaumaris.

The stone coffin of Llywelyn ab Iorwerth in the Chapel 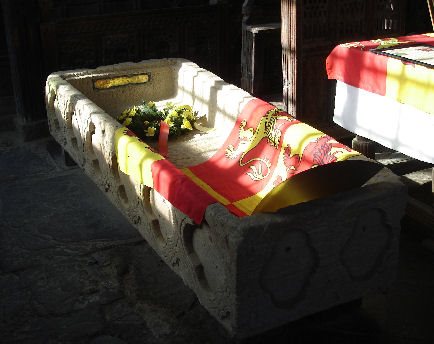 The chapel also contains the medieval stone effigy of Hywel Coetmor, once the owner of Gwydir Castle, who fought at the Battle of Poiters in 1356 under Edward, the Black Prince, son of King Edward III and later participated in the Glyndwr rebellion against Henry IV, the spur of the fifteenth century bandit Dafydd ap Siencyn and a memorial to William Salebury, the first to translate the New Testament into Welsh.