The pleasant village of Dolwyddelan, famed for its medieval castle, is situated in the Lledr Valley at the foot of Moel Siabod, it lies north of Blaenau Ffestiniog, and five miles south west of the village of Betws-y-Coed, the name translates as the meadow of Gwyddelan. The village, set in a magnificent landscape of pine clad hils, was once a centre for the local slate mining industry

Impressive Dolwyddelan Castle, which dominates the village standing high on a on a rocky ridge, is reputed to be the the birthplace of the renowned Llywelyn the Great, otherwise known as Llywelyn ap Iorwerth, who was born circa 1173. The castle consists of two rectangular towers connected by a curtain wall. The views of the surrounding landscape from the top of the tower are spectacular. Tomen Castle, a Welsh earth and timber castle which occupies a rocky knoll on the valley bottom at Dolwyddelan, was the reputed birthplace of Llywelyn the Great. Today the mound or motte is covered with trees and vegetation but traces of a rectangular tower are discernable on the summit. 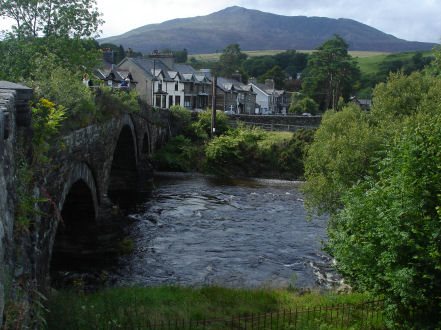 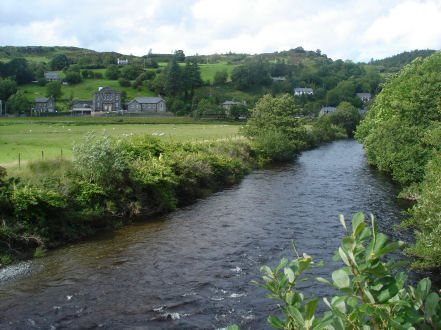 The church of St. Gwyddelan

The attractive village church of St. Gwyddelan dates back to around 1500. The original church at Dolwyddelan was located nearer to the castle. The present church was built by Meredudd ap Ieuan ap Robert, an ancestor of the influential Wynn family of Gwydir Castle, who came to reside in Dolwyddelan in the late fifteenth century. 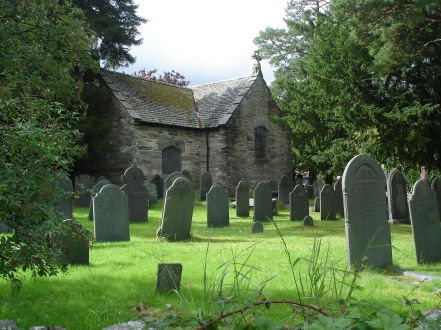 Local outlaws who were based at Ysbyty Ifan regularly attacked his home, often while the household was at church to worship on Sunday. The old church was located nearer the castle, at Bryn y Bedd and could not be seen from the house, rendering it impossible to keep a lookout for them. Meredydd consequently decided to build a new church on more open ground. He stationed lookouts to raise the alarm above Carreg Alltrem and near the church and also organised a group of local farmers who were prepared to oppose the bandits.

The East window of the church contains fragments of glass which date to 1512, the elaborately carved rood screen possibly came from the old church. Situated above the altar is a carved barrel vault, the north beam of this vault bears a carving of the so-called Dolwyddelan Dragon, which also probably originated from the old church. Local folklore relates that this monster came from the sea and travelled up the river to the village. Because it was reputedly responsible for causing floods in the valley, it was taken to a lake in the mountains. The Clock Bell dates from the seventh century and is reputed to have belonged to St. Gwyddelan and brought by him from Ireland. It was excavated at the site of the old church in the nineteenth century. One of the front pews bears the quaint inscription 'Maingc i'r dyla i clyw' ('a bench for the hard of hearing').