The Isle of Anglesey boasts a wealth of unusual megalithic structures. Situated near Ellen's Tower by panoramic South Stack on Holy Island, the Iron Age settlement at the foot of Holyhead Mountain, also known as Cytiau'r Gwyddelod, which translates as 'The Irishmen's Huts', other names used for the settlement include Clwster Cytiau Mynydd Caergybi and the Ty Mawr Hut Group.

The first of the huts, nearest to the road 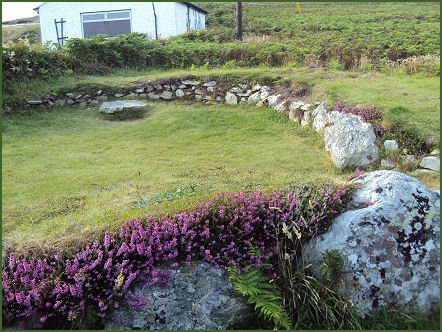 The settlement has the substantial remains of 20 out of the original 50 Iron Age buildings, once a farming community covering 15-20 acres, that originated in around 500 B.C. The remains of the huts are scattered along the hillside, as well as numerous smaller partly subterranian storage sheds, cattle shelters and work shops, similar to those found in early Cornish villages. Evidence of metal-working was found in some of these buildings. 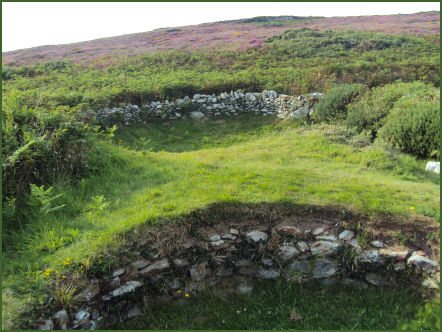 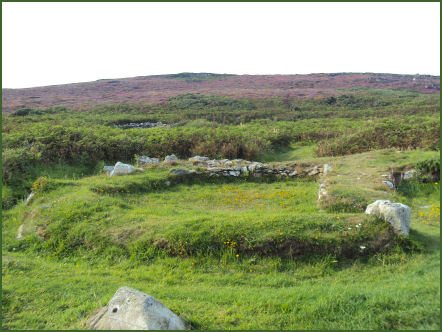 The round stone huts measure around 7 metres in diameter with thick, low walls. They would have had a high, conical roof supported on a ring of posts and thatched with straw or reeds. Inside some of the hut circles there are examples of stone furniture including ledges and basins incorporated into the stonework. There is evidence of a long history of settlement from the Middle Stone Age, Neolithic and Bronze Age, to the Iron Age. At the east end of the site there is another group of huts.

The surrounding land was ploughed by the community, wheat, oats and barley seeds have been discovered, evidence of limpet and periwinkle shells offer a clear indication that food was also taken from the sea. Charcoal of heather and sedge was also discovered.

Right -an artists impression of how the huts would have appeared 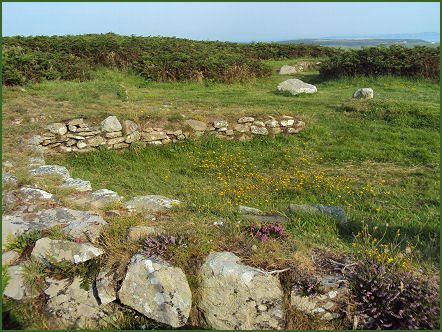 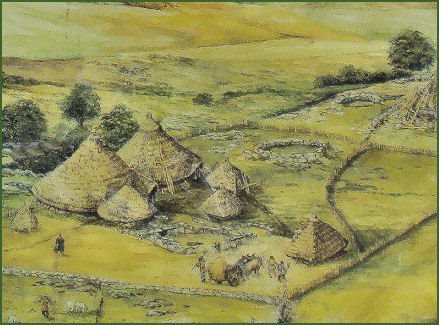 The first excavations of the site took place in the 1860's, further excavations were carried out in the 1970's. Finds from the site include flint arrowheads, part of a stone axe and pottery remains that date from the late Neolithic or early Bronze Age as well as small hoard of Roman coins found within one of the huts. The Roman finds lead to the belief that the hut group was a Romano-British settlement but more recent radio carbon dating suggests some of the settlement was occupied as early as 500BC. The site is now in the care of Cadw. Further up the hillside are the remains of Caer y Twr Hillfort dating to the 4th century and a Roman signal station.

From Holyhead town centre, follow the road to Outer Harbour, then follow signs to South Stack. Park in the car park on the left, just over 0.6 km after right hand turn.