The small Welsh seaside resort of Aberdovey huddles along its quayside.Aberdyfi, to give it its Welsh spelling, is situated where the River Dovey meets Cardigan Bay.

Aberdovey was founded on the shipbuilding industry but developed as a seaside resort in Victorian times . The resort occupies steep slopes, some of the colourful houses are actually built into the cliffs.

The town is renowned for its excellent sailing and water sports facilities and offers sailing sailboarding, fishing, boat trips and a Summer Regatta.

The quayside can be quite busy, it caters for the Outward Bound School of Wales, which promotes courses in sailing, canoeing and climbing.

The village's beach is excellent, given the Blue Flag award in 2005. The beach stretches for four miles up the coastline, there are canoe and sailboard rentals. Swimming is possible but tidal currents can make hazardous. Aberdovey also boasts an 18 hole championship golf course.

The nearby marshes on the southern side of the estuary, which encompass a range of wildlife habitats, are owned by the Dyfi National Nature Reserve and contain a variety of wildfowl and migrant wading birds. The RSPB Ynyshir Reserve has over 70 species of breeding birds. The RSPB have installed excellent hides with views over the saltmarshes.

Left - Sailing from the beach Right - the colourful Promenade 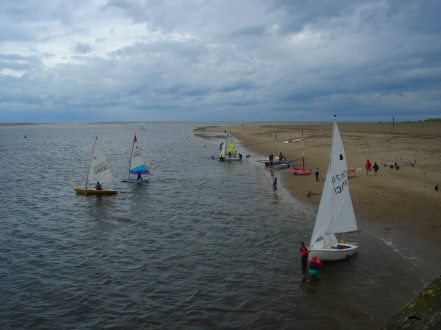 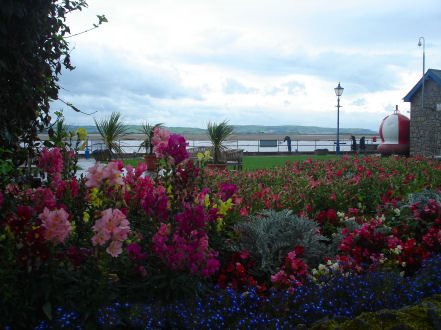 Aberdovey Castle was constructed around 1156 to defend the area against threatened attacks by Owain Gwynedd, although the suspected attacks never materialised. Known in Welsh as Domen Las, Aberdovey is a motte castle with surrounding deep ditches, which utilises its position above the River Dyfi and its marshes.

The Normans attacked Aberdovey Castle and briefly captured it in 1158, but it was soon retaken. Lywellyn ap Gruffyd held an assembly at the castle in 1216, at which he distributed land in South Wales to the attendant Welsh Princes in return for their homage.