The Great Orme Bronze Age Copper Mines at Llandudno were unearthed in 1987 in the course of a scheme to landscape an area of the headland as a car park. A visit to the mines presents a fascinating experience.

The prehistoric labyrinth beneath the Great Orme represents one of the most astounding archaeological discoveries of recent time and dates back around 4,000 years to the Bronze Age. Since their discovery mining engineers, cavers and archaeologists have been slowly uncovering more tunnels and large areas of the surface landscape to reveal a unique and exceptionally important site, the only Bronze Age copper mine in Europe which can be visited by the public, with more than six kilometers of tunnels.

The mine is thought to have been worked by local people who used nothing but bone scrapers, largely from farmed animals, which have been found discarded in the mines, and stone hammers to extract the copper. The copper mined at the Great Orme would have been used in the production of axes and other implements. 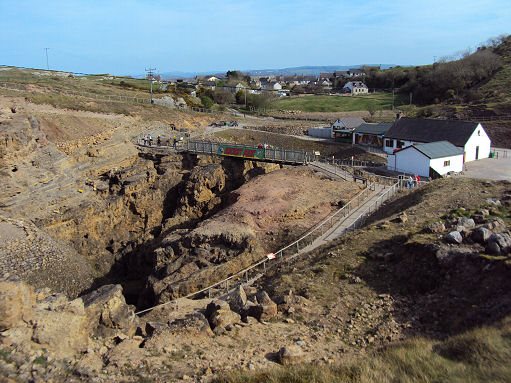 The mines are believed to have been abandoned around 600 BC, and there is some evidence of Roman patronage, they were reopened in 1692 and continued to be worked until the end of the 19th century. It is possible that some of the copper from the mine was exported to Continental Europe, even in the Bronze Age.

Visitors can penetrate deep into the hillside along specially heightened galleries which cross the unervingly small Bronze Age working areas, some are large enough to walk through while others are so small that very young children must have mined them. The highlight of the tour is the large and impressive Bronze Age Cavern, which includes an audio-visual film and the ongoing archaeological excavations.

The huge cavern was dug out over 3,500 years ago. The surface includes archaeological excavations and the Great Opencast, a huge depression which is thought to be a 4,000 years old opencast. The reconstructed smelting site is where the copper ore was smelted into copper.

Visitor centre and cafe on site.