The impressive Segontium Roman Fort was an auxiliary fort constructed by the Romans in around 77A.D. Although it was a remote outpost, it is one of the most well known Roman sites in the country and attracts thousands of visitors each year.

The fort housed a regiment of up to 1,000 auxiliary soldiers. A strategic base, it once controlled access to the Island of Angelsey and protected the coast. Apart from its military functions, Segontium was also used by the Romans the administrative centre for north west Wales. Segontium's name derives from that of the river: ' sego- ' , meaning 'vigorous', which is hidden in its modern form, Seiont.

The museum at the site vividly illustrates the story of the conquest and occupation of Wales by the Emperor Julius Agricola and contains many fascinating artefacts excavated from the Segontium site.

The remains of the fort itself are owned by CADW and represent the only Roman fort site in Wales revealing the internal layout of a Roman Auxiliary Fort.

Archaeological excavations carried out at the site between 1975-79 revealed a number of timber barrack blocks in the south-east quarter dating to the late first century and earlier part of the second century AD. 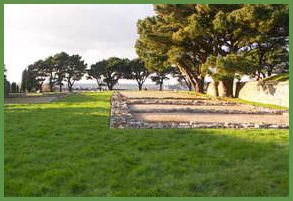 A large courtyard house, with its own small bathhouse, was built in the mid second century in the south-east corner. This building may possibly have been the residence of an important official. Coins have been discovered on the site which reveal that Segontium was garrisoned by the Romans up until AD 394.

Segontium Roman Museum is situated on the A4085, on the road leading to Beddgelert, about one mile from the centre of the town of Caernarfon.