The hamlet of Llanrhychwyn lies in a superb setting in a popular walking area and is situated around a mile to the south of Trefriw in the Conway Valley. The village derives its name from Rhychwyn, son of Prince Helig ap Glannog.

The famous Welsh language poet Robert Williams (1830-77), known as Trebor Mai, was a native of Llanrhychwyn, one of his most famous works was his englynion. Richard Owen Roberts, the father of Gwilym Roberts the story-teller, was another native of the village.

Surrounded by Yew trees, characterful Llanrhychwyn Church is claimed to be the oldest church in Wales and is said to occupy the site where Rhychwyn originally established his church in the sixth century.

The oldest part of the present building dates from the late eleventh century, and is known locally as Llewelyn's Church in honour of Llywelyn ap Iorwerth. Prince Llywelyn owned a hunting lodge at nearby Trefriw, and along with his wife Joan, who was the illegitimate daughter of King John of England, would often climb the steep slope up to Llanrhychwyn church. Joan grew weary of the climb over the years and consequently, Llywelyn endowed another church in about 1230, on a lower site where St Mary's Church at Trefriw now stands. 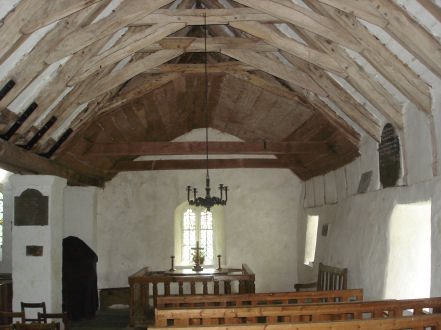 The church represents good example of primitive architecture. In common with many Welsh churches, Llanrhychwyn has a double nave. In the south nave is a late medieval depiction of the Trinity. The east aisle is a thirteenth century addition, while the north aisle dates from the sixteenth century. The roof beams, which date from the eleventh century, are reputed to be the earliest example in Wales. The church bell, which is of thirteenth century origin, may have originated from Maenan Abbey. The ornate chalice is dated 1614. The church has the oldest known font in Britain, which would have originally lain on the floor.

Services are now only held in Llanrhychwyn church during the summer months, and on special occasions. If locked, the key is available for visitors from nearby Tu Hwnt i'r Gors Farm.