The spectacular hanging valley of Cwm Idwal, surrounded by the high peaks of Y Garn (3,107 feet / 947 metres) and Glyder Fawr (3,278 feet / 999 metres), lies in the Glyderau mountain range and is a classic example of a landscape which was dramatically sculptured by ice thousands of years ago. 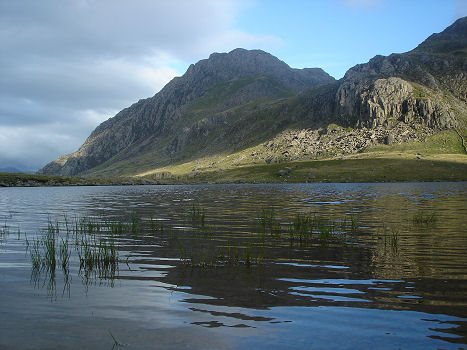 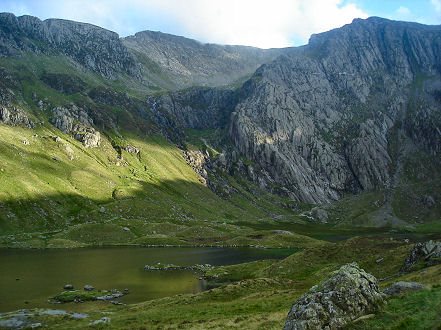 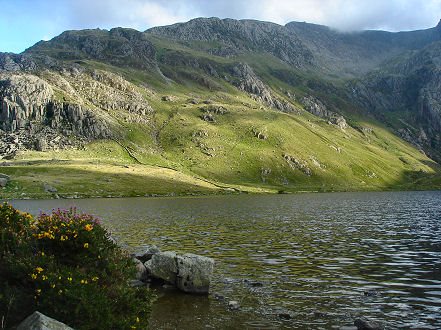 Llyn Idwal, measuring 800 metres long by 300 metres wide, is surrounded by towering high crags, screes, glacial moraines and wind shattered rocks, is named after Idwal, the son of one of the ancient Princes of Wales, Owain, Prince of Gwyneddd, legend relates Idwal was murdered by being drowned in the lake. Tradition further states that no bird flies over the lake, as a result of Idwal's terrible fate.

The Cliffs of Cloqwen y Geifr 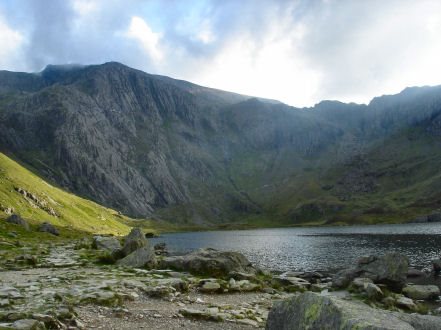 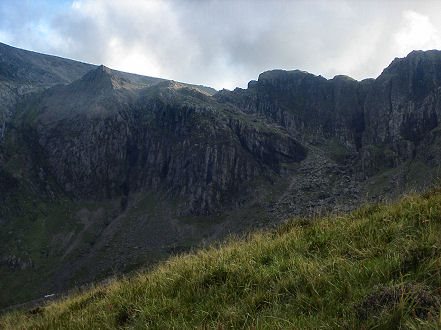 The dark and brooding cliffs of Cloqwen y Geifr ( the Cliff of the Goat) form a dramatic backdrop to the lake. The plume of steam that rises from a crack in the towering rocks above, once viewed as having sinister origins, bestows another name on the area- Devil's Kitchen. The steam, however is actually the result of moist air coming into contact with the rock face, which forces it upwards, causing it to cool and condense, forming swirling clouds. Devil's Kitchen is known in Welsh as Twll Du, meaning black hole. 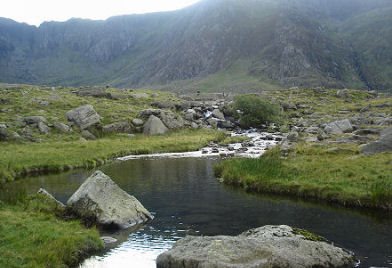 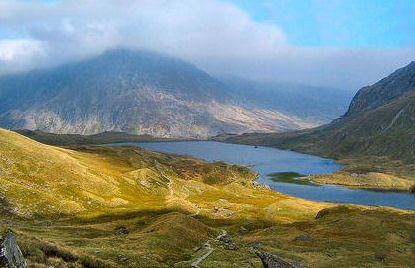 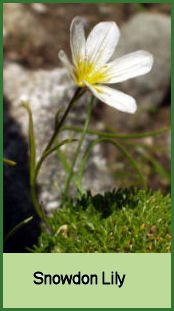 Cwm Idwal is a Site of Special Scientific Interest (SSSI), the cwm was also the first nature Reserve in Wales, being designated as such in 1954. Its fascinating geological features drew the famous nineteenth century naturalist Charles Darwin to the area. The area around the lake has much interesting geology and botany and is popular for walking, climbing and, in the winter months, ice climbing. The Idwal slabs and the cliffs around the head of Cwm Idwal are a particularly popular for rock climbing. Two further hanging valleys, Cwm Clyd, to the west and Cwm Cneifon, on the eastern side open into Cwm Idwal.

Cwm Idwal is one of the best areas to see plants which were once very common during the cold glacial periods.The Cwm is the most southerly place in the British Isles where Arctic plants such as moss campion and some alpine saxifrages, including tufted saxifrage (Saxifraga cespitosa) and Saxifraga nivalis are found to grow in the cracks and crevices. The fascinating insectivorous butterwort catches insects in its leaves.

The Snowdon lily (Lloydia Serotina), a protected species, also inhabits the area, a plant which can only be found in Britain, on Mount Snowdon and the surrounding area, it appears that the Snowdon Lily, known in Welsh as brwynddail y mynydd, has never had a wider British distribution. It is the only member of the genus Lloydia to survive outside central and eastern Asia. The purple veined, white flowers bloom from June onwards.

The Snowdonia hawkweed, (Hieracium snowdoniense) is only known to occur in Cwm Idwal. Parts of ancient birch trees may be found buried in peat, even though there are no birches grow nearby today, itself suggestive that the Welsh uplands were formerly far more wooded than they are today.

The Route to Cwm Idwal 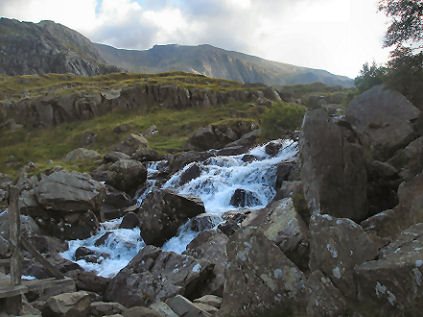 A highly panoramic short walk in the Glyderau range, which involves little ascending.

*Commencing at the car park at Ogwen Cottage off the A5 by Lyn Ogwen, keep to the left passing the Information Centre and follow the path which leads upwards along the course of the waterfall, continuing on to pass through an iron gate.

* Continue to follow along the clear stone path, passing a further picturesque waterfall via a wooden bridge.

* Follow along the path, which provides panoramic views of Tryfan, Llyn Ogwen and Pen yr Ole Wen, passing the waterfalls at the outflow of Llyn Idwal on the right, until arriving at Cwm Idwal.

*Proceed along the track to the left or right to circumnavigate the lake.

* Retrace your steps to return to Llyn Ogwen.