One of the smallest cities in the UK, Bangor lies on the south side of the Menai Strait, nine miles north-east of Caernarfon. The name means a wattled fence in Welsh. The city is linked to Anglesey by the Menai Suspension Bridge designed by Thomas Telford in 1811 and completed and opened on 30 January, 1826..

A 600 metre long Victorian pier, built in 1895 and refurbished in the 1990's extends into the Menai Strait towards the Isle of Anglessey. The Pier, which is the second longest in Wales, was saved from dereliction when Bangor Council purchased it for a 1p and restored it to its Victorian glory with the help of grant aid. A selection of shops, a cafe, children's play area and amusements now stand on the pier.

Bangor is perhaps most famous for its university, Bangor College was established in 1883, but at the time, in common with Aberystwyth and Cardiff, was not allowed to confer degrees. All three colleges were incorporated as the University of Wales in 1893. 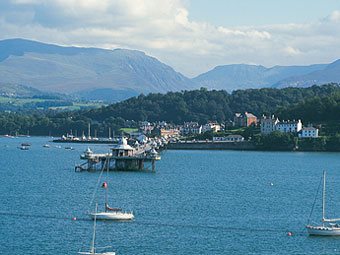 The Bangor Museum and Art Gallery, It is the only general Museum in Gwynedd, with exhibits covering the city's history from prehistoric times to the modern age.The Art Gallery features exhibitions from some of the most prominent of Welsh artists, such as Rob Piercy, William Selwyn and Huw Gareth Jones.

Bangor Cathedral, which stands in the centre of the city, is one of the earliest monastic settlements in Britain, being founded by St. Deiniol in around the year 525 (making it 70 years older than Canterbury Cathedral) on land given by the king of Gwynedd, Maelgwn Gwynedd. Having been given land, Deniol enclosed it with a fence constructed by driving poles into the ground and weaving branches in between them. The native technical term for this type of fence was 'bangor', which is how the city derived its name. Within this enclosure Deiniol built his church.