The small coastal village of Llanaber lies around one and a half miles north of Barmouth.

Overlooking beautiful Cardigan Bay, the village is situated at the mouth of the River Man and boasts a wide sandy beach.

The village church of St. Bodvan, which stands near the beach, dates to the thirteenth century, and is of mixed Norman and early English in style. Its interior contains an exquisite chancel roof, an ancient font, and a old chest once used for public offerings. 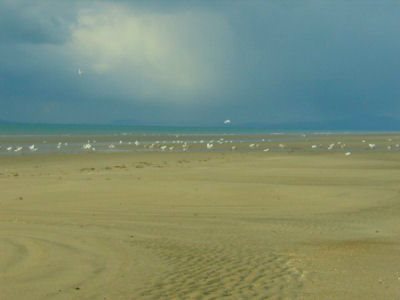 The church also contains two ancient stones dating to the late fifth or early sixth century. The first was found by an antiquary on Barmouth Beach it is inscribed with the words caelixti monedo regi meaning Coelixtus, King of Anglesey. The second reads aetern et aetern(ae) meaning the stone of Aeternus and Aeterna and was previously used as a footbridge .

The village offers a range of hotel and guest house accommodation.