The spectacular waterfall of Pistyll Cain (Cain's waterspout), in the Coed y Brenin Forest (which translates as the Forest of the Kings) is situated in the beautiful wooded valley of the Afon Cain, a tributary of the Afon Mawddach. The Afon Cain falls over a sheer cliff into a terraced series of rocks. The iron bridge that lies several yards directly in front of the waterfall is a good point to view it from. 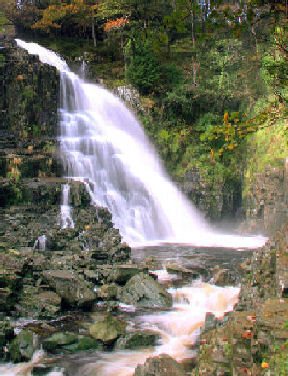 The waterfall, which falls 150 feet in total, is not accessible by road.

A further impressive waterfall, Rhaeadr Mawddach, is situated nearby.