The Maen y Bardd Burial Chamber, or the Stone of the Bard, stands in a scenic location on the southern slopes of Tal y Fan Mountain, high above the Conwy Valley.

The neolithic chamber dates to around 3,500B.C. The remains of a portal dolmen it consists of a rectangular chamber, of around 1.2m in height, it would originally have been covered with a stone cairn the remains of which can still been seen around the monument. The large projecting capstone rests on three uprights. 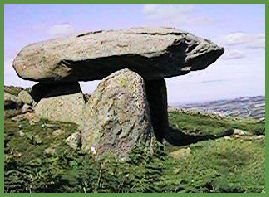 The monument is also sometmes referred to as Cwrt-y-Filiast (Kennel of the Greyhound). Local Legend relates that a giant slung his great spear across the valley at his sheepdog which was sheltering in the chamber.

The monument is accessed via an ancient trackway that runs past many interesting historic features.

A walk to Maen y Bardd

*Commencing at the small car park at Bwlch y Ddeufaen, leave the car park and back track along the lane for around three quarters of a mile, stopping a few yards before the sharp right hand bend in the road at Tan-y-Braich.

*Cross the high stile and continue in an eastern direction along the Roman road. On arriving at a road junction proceed straight ahead, toward Rowen, for around a third of a mile. On your left you will pass a renovated homestead Cae Coch and after a few hundred yards more a large standing stone. Maen y Bardd is ocated further down the lane on raised ground to the left of the track.