The Bryn Cader Faner cairn circle is located near the village of Talsarnau, which lies south of Porthmadog.

The cairn circle stands in a dramatic setting on a hill overlooking the ancient Bronze Age trackway which stretches from Llanbedr to Trawsfynydd. Bryn Cader Faner is one of the wonders of prehistoric Wales, and one of the most unusual Bronze Age sites in Britain. The small cairn measures 8.5 metres (28 feet) wide and stands less than 1 metre (3feet) high, its fifteen thin stone slabs lean out of the mass of the monument like a crown of thorns, the pit at the centre of the cairn exposes a large cist which once would have once contained human remains. The stones all appear to be of slate and many of the cairn stones had prominent quartz veining. 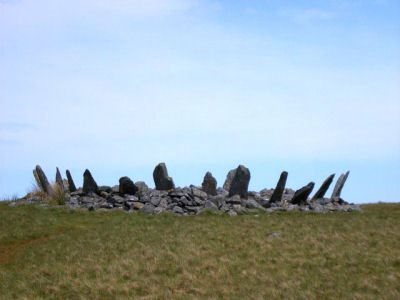 The cairn circle was vandalised by treasure seekers in the nineteenth century and the hole that they dug can still be seen today. It was further damaged by the army during the Second World War, when it was used for target practice.

Bryn Cader Faner has similarities to Carn Llechart, in Glamorgan. Access to the site involves a 4 km walk over marshy ground from the nearest road.