Llyn Cwellyn is a large reservoir situated by A4085, near to the village of Rhydd Du, situated on the Afon Gwyrfai in Nant y Betws between the Snowdon Massif and Mynydd Mawr. The reservoir provides drinking water to parts of Gwynedd and Anglesey.

In times past referred to as Llyn Quellyn, the lake is very deep and is one of the few in Wales to contain a natural population of Artic char, it also contains trout. Llyn Cwellyn is a glacial moraine lake formed during the last Ice Age and is now dammed at the northern end, near to the small village of Betws Garmon. 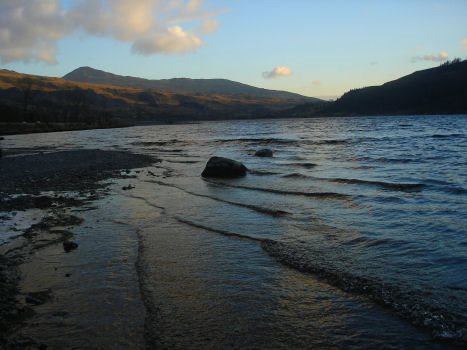 Castell Cidwm, or Wolf Castle as it is known in English, is situated on towering cliffs at the northern end of the lake, it was once thought to be the remains of an ancient Celtic fort, but is now known to be a totally natural rock formation. Legend states it was once held by a robber chief who is reputed to have murdered a brother of the Roman Emperor Constantine.

A walk to Mynydd Mawr from Rhydd Du

*Commencing outside the Cwellyn Arms at Rhydd Du, turn left and proceed along the B4418, after passing Cefn Cwellyn turn right along the forest path.

*The road turns into a footpath and turns left ascending through woodland. Upon reaching a ladder stile turn right and continue along the edge of the woodland to ascend the east ridge of Mynydd Mawr to Foel Rudd which offers superb views.

*Continue along the top edge of Craig y Bera. The track then turns north west to ascend to the summit.

*Continue in a north easterly direction to reach the col before Craig Cwmbychan. Follow the course of the stream which runs down the slopes to Llyn Cwellyn. Cross the stream before it joins the Afon Goch.

*On reaching the shores of the lake continue along the forest path for around a mile to arrive at a barn and a stile by a gate, then follow the edge of the forest to reach a gate leading into the trees, fork left along the path through the trees. Where the track peters out turn right to rejoin the forest road used at the start of the walk. From her retrace your steps to return to Rhydd Du.