The village of Dinas Mawddwy is set amongst stunning scenery in the tranquil Llaethnant valley. The village was once the centre of the local lead mining industry.

Dinas Mawddwy's rough stone buildings huddle along its wide main street, while steep hills and mountains soar up on either side. At the northern end, towers the summit of Foel Benddin at over 1, 700 feet.

The Dyfi Bridge, just below the town, is the terminus for the railway which closed in 1950. The oldest building in Dinas Mawddwy is Gwesty'r Llew Coch ( the Red Lion Inn).

A woollen mill, the Meirion Mill which is open to the public, the entrance gates stand opposite the Buckley Arms Hotel. The various weaving processes are explained and demonstrated. There is a large craft shop selling traditional welsh weaves, bedcovers, rugs and clothing. 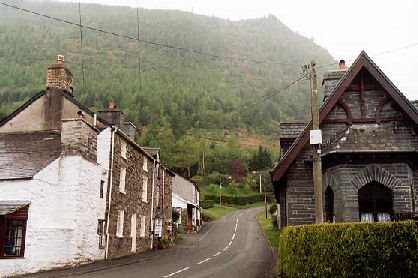 Dinas Mawddwy once had a fearsome reputation, the area was infamous in the sixteenth century for the 'red haired thieves of Mawddwy' or the 'Gwylliad Cochion Mawddwy' who terrorised the area, plundering, murdering and pillaging and who were responsible for the murder of the Sheriff of Meirionnydd, the Baron Lewis Owen, of Cwrt Plas-yn-dre, Dolgellau on 12th October 1555. The area of Mawddwy was a territory where there were then great difficulties in preserving the law, since it was situated on the boundary between the Welsh Marches and Meirionnyd. The bandits reputed meeting place was at the Brigand's Inn at nearby Mallwyd. They were eventually apprehended in 1555 and many of the band of outlaws were hung. A burial mound on nearby Rhos Groch (The Red Moor) is said to be where their bodies were buried after execution.