Shell Island is a peninsula, which becomes an island at high tide and is situated near the village of Llanbedr. it was formed when the river Artro was diverted in 1819 by the Earl of Winchelsey from its previous course where it entered the sea to the south of Shell Island. Access to the 'island' by vehicle is via a causeway across the estuary of the river Artro when the tide is out, since the 'island' is privately owned, a fee is payable. Access on foot is possible at all times from the adjoining Morfa Dyffryn beach.

The island is renowned for its wild flowers, range of shells and wild birds and the panoramic views it affords of beautiful Cardigan Bay, Medieval Harlech Castle and Mount Snowdon.

There are three beaches on the peninsula, the main beach extends for six miles down to the resort of Barmouth, it offers good windsurfing and kitesurfing conditions and is backed by sand dunes. The dunes on the island were once some of the highest in the UK, rising to 125 feet. The other two beaches are only accessible when the tide is out.

During the spring tides, when the water is particularly low, a reef, known as St Patrick's causeway, may be sighted from the sand dune main car park. This reef funnels the shells on to the island's beaches. Shells are found in abundance after the winter storms and high tides. More than two hundred different varieties of shells can be found over a season. 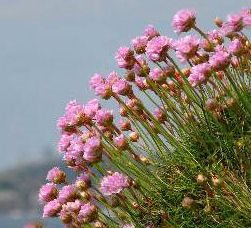 The island contains the largest campsite in Europe, with three hundred acres of land alloted to camping, which offers the opportunity for visitors to experience "wild camping". Shell Island's restaurant was converted from an old barn and there is also a snack bar for tea, coffee and light meals, a tavern bar, games area, supermarket camp and leisure shop and a gift shop selling a range of souvenirs.

There is an old farmhouse on the island which is reputed to be haunted, parts of which are recorded in the Domesday Book of 1086. The house was occupied by the Welsh bard, Sion Philips, a contemporary of Shakespeare, who was drowned in 1620 while attempting to cross back to the island and is buried at the ancient church of St.Tanwg in the sand dunes at nearby Llandanwg.