Imposing Glyder Fawr, which translates as 'Big Mound', is the highest summit in the Glyderau mountain range, soaring to 999 metres (3, 278 feet), it is the fifth highest mountain in the Snowdonia National Park.

Glyder Fawr, which is pronounced as Gleyder Vower, lies on the main Glyder massif, occupying a ridge between Glyder Fach and Y Garn. The summit is very rocky, making progress slow. The summit boasts magnificent views to the north, across the Ogwen Valley, can be seen Pen yr Ole Wen (3,209 feet / 978 metres), Tryfan (3,002 feet / 915 metres) and the Carneddau range, while views to the south encompass Mount Snowdon (3,560 feet / 1, 085 metres) and the dramatic Snowdon Horseshoe. 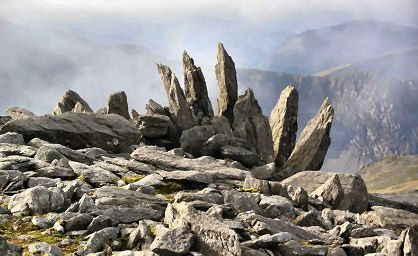 The summit of Glyder Fawr is characterised by a series of weathered tors which were formed during the last Ice Age. The mountain's northern slopes are flanked by a series of vertical cliffs and butresses.

Routes to the summit lead from Ogwen Cottage on the shores of Llyn Idwal to the north, from to the south, and along the Glyder ridge to the east and west, leading to Y Garn and Glyder Fach.

The summit of the mountain marks the boundary between Gwynedd and Conway County Borough.

According to Sir Ifor Williams, the word "Glyder" derives from the Welsh word "Gludair", meaning a heap of stones. 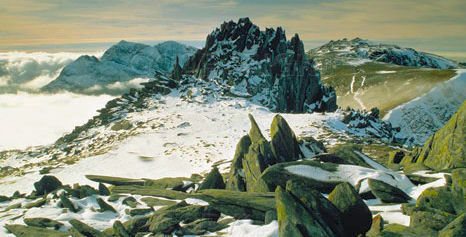 To the east of the summit lies the shattered pinnacles of Castell y Gwynt (972 metres / 3,189 feet), which translates into English as the "castle of the wind", a spiky rocky outcrop, with fantastic rock formations, which, along with the nearby Cantilever Stone, was used in the Walt Disney film "The Dragonslayer". The famous Cantilever Stone, just below the summit of Glyder Fach, is a large flat rock weighing around 70 tons, which from the correct angle appears to be precariously balanced.

A walk to the summit of Glyder Fawr

*Proceed over the rocks until the ground levels, then turn right up the chute leading onto the broad ridge. Continue upwards until arriving at the first level area.

*Turn right and follow the path around the peak. Drop down, then a gentle scramble to the main Central Peak follows.

* Descend over the Far South Peak to Bwch y Tryfan, crossing the wall stile, then follow the steep scree path to the left of Bristly Ridge to arrive at Glyder Fach. Proceed along the path to Castell y Gwynt.

*Follow the path which skirts around to the left of Castell y Gwynt, to reach the path that ascends to Glyder Fawr. Continue along the path passing through an area with rocks jutting up like fingers out of the ground, to reach the summit of Glyder Fawr.

*Retrace your steps to return to the car park at Llyn Ogwen.