The scenic Mawddach Trail long distance footpath and cycle route winds from for 9.5 miles (15km) following the edge of the spectacular Mawddach estuary, commencing at the town of Dolgellau, it finishes by crossing the three quarter mile long railway bridge over the mouth of the estuary into Barmouth. The trail can be joined at several points, including Morfa Mawddach and Penmaenpool, where there is a wildlife centre administered by the Royal society for the Protection of Birds and the North Wales Wildlife Trust.

The route follows a now disused railway track bed and combines spectacular mountain and coastal scenery. with the Rhinog hills on one side and the Cadair Idris massif on the other, the Mawddach estuary is considered to be one of the most beautiful in the country and rich in wildlife, is also a bird sanctuary. The Victorian poet, artist, critic and conservationalist, John Ruskin, once stated that only one other journey in the world had views to compare with the one from Dolgellau to Barmouth. 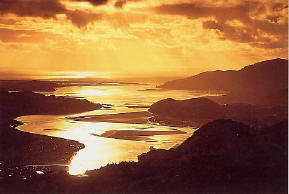 Much of the route is owned by Snowdonia National Park Authority, who are committed to the conservation of the area. The railway line which trackbed forms the trail, opened in the 1860s, and once ran from Ruabon to the Cambrian coast, but was closed in 1965 due to lack of profits.

The route is fairly flat and involves no climbing. The trail has occasional picnic areas and viewpoints. A section of it has been adapted for people with disabilities. This part of the trail is laid with shale waste for easy access for wheelchairs and has a handrail along the route

Car parks are situated at Morfa Mawddach, Arthog and Penmaenpool.