Situated north of Beddgelert in the Nant Gwynant Pass, Llyn Dinas a mountain lake offering some excellent walks in panoramic scenery and has a car park nearby. It is a fairly shallow lake, covering an area of 60 acres.

The lake derives its name from the nearby hillfort of Dinas Emrys, the remains of medieval and Dark Age fortifications. The fort provided shelter for the British king Vortigern, who escaped into Wales from the invading Anglo-Saxons. After the demise of Vortigern, the fort became the property of Aurelius Ambrosius, known as Emrys Wledig or the Emperor, from which the present name of the fort derives 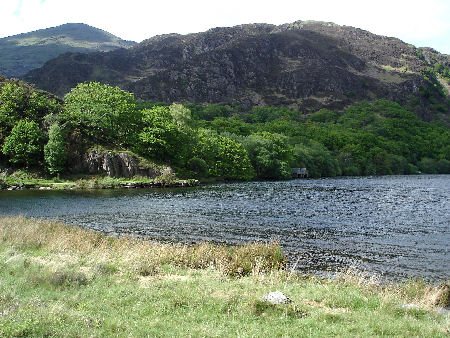 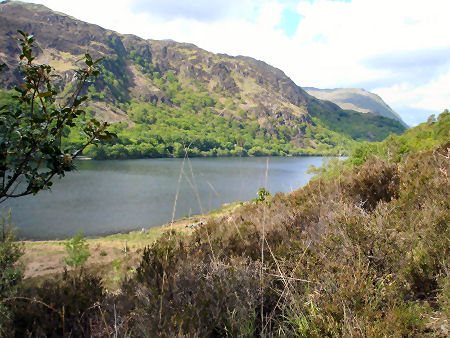 Legend states the lake to have been the site of a battle between Owein, one of Arthur's greatest warriors, and a giant. According to legend, Vortigern is said to have hidden the throne of Britain beneath a great stone by Llyn Dinas.

A scene for the film 'Inn of the Sixth Happiness' was shot at Llyn Dinas. It featured Ingrid Bergman, who played the role of missionary Gladys Aylward, she crossed the lake on a raft with children whilst escaping from the pursuing Japanese.

A walk to Llyn Dinas from Beddgelert 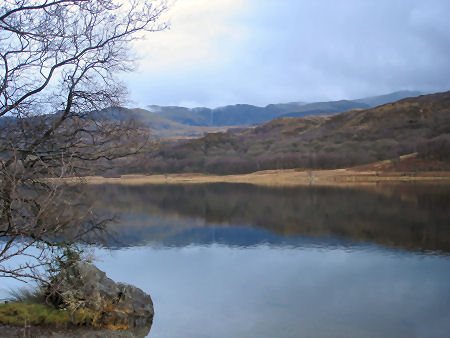 Commencing at the Pay and display Car park at the Royal Goat Hotel in Beddgelert, turn left toward the bridge, before the bridge turn right onto the road that runs parallel with the river, signposted for Gelert's Grave.

At the path to gelert's Grave proceed forward over the metal footbridge over the River Glaslyn passing the left of a row of cottages. Cross the road near a bridge and along the Riverside Walk. The path ends at a stile, continue along the lane, going through the gate toward the Sygun Copper Mine

At the entrance to the mine turn left onto a wide track leading to the road, continue as far as the bridge over the river. Just before the bridge, bear right and follow the path to Llyn Dinas. On reaching the lake after passing through the gate, turn right onto the rising path.

The path rises steeply and crosses an area of mountainous moorland. At a signposted junction continue forward for Beddgelert, crossing the stile at Bwlch-y-Sygun where there is a superb viewpoint encompassing Moel Hebog, Moel Lefn and Moel yr Ogof. Take care on the descent of the rock steps.

As the route begins to descend again take the path that branches to the left, following the signs for Beddgelert. At the path junction by a large cairn on a rocky outcrop, bear right. Turn left beside the river and follow the outward route back to Beddgelert.