The small harbour town Porthmadog is situated on the highly attractive Glaslyn estuary on the edge of the Snowdonia National Park.

The town was founded after William Alexander Madocks reclaimed a large area of the Traeth Mawr from the sea, by means of a sea wall, known as 'the Cob'. According to some sources the town derives its name from its founder Madocks. Porthmadog boasts a rich maritime history, becoming a flourishing port in the latter part of the nineteenth century. The small harbour at Porthmadog once exported slate all over the world. The Ffestiniog Railway which opened for freight traffic in 1836, transported the slate from its source at Blaenau Ffestiniog.

The town has a number of facilities and attractions including a modern Leisure Centre, a small Maritime Museum, the Ffestiniog Railway and the Welsh Highland Railway. There are a number of interesting shops, accommodation to suit all budgets and many restaurants, cafes and pubs. 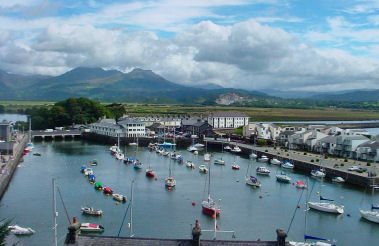 The Welsh Highland Railway commences at Porthmadog and passes through some superb scenery enroute to Rhyd Ddu at the foot of Mount Snowdon. The station is situated in the High street opposite the main line railway station. The railway operates a regular service of vintage steam and diesel hauled trains along a 1.25-mile long narrow gauge line.

The Snowdon Mill, located near the High Street was once a flour mill which dates to 1862 and offers wide range of locally produced crafts.

Nearby Black Rock Sands or Morfa Bychan has an excellent sandy beach with rock pools and caves and is backed by sand dunes which are a Site of Special Scientific Interest and offer superb views of Cardigan Bay. The pleasant coastal village of Borth-y-Gest located around a mile from Porthmadog, is reached by a scenic wooded road overlooked by the soaring crags of Moel-y-Gest.