The Oriel was awarded the Best Anglesey Arts/Heritage of the Year Award for 2010 in the prestigious Anglesey Tourism Partnership annual tourism awards.

A two-part centre, the Art Gallery has a changing programme of exhibitions, encompassing art, craft, drama and sculpture, and has a varied annual programme to suit all tastes. Contemporary art is shown in the main gallery with two smaller spaces, complemented by earlier works. The gallery's holdings include the works of artist Charles Tunnicliffe, best known for his wildlife paintings and measured drawings and the world's largest collection of the works of local artist Sir Kyffin Williams. The Art Gallery holds up to eight exhibitions annually.

Visitors who wish to learn about the cultural history of Anglesey can enjoy the centre's History Gallery which gives an introduction to the island's past through sound, imagery, reconstructions and real artefacts from its Stone Age burial chambers through to its magnificent mediaeval castles. There is a full scale replica of the inside of the spectacular Cruciform Passage Grave of Barclodiad y Gawres.

The Lyn Cerrig Bach- Treasure From The Iron Age Exhibition is on show at the Oriel from July 14th - November 11th, 2012

The Llyn Cerrig Bach hoard consists of over a hundred and fifty items of bronze and iron discovered at the Cors yr Ynys bog at the southern margin of Llyn Cerrig Bach, a small lake in the north-west of Anglesey.

The items were discovered at the time of the Second World War during the construction of the RAF airfield at Valley, Anglesey, by workmen digging peat from the site. They may have been placed in the lake as votive offerings. 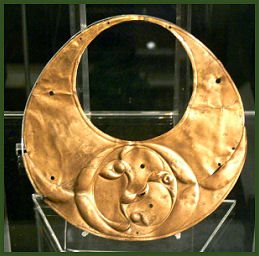 The first object to be unearthed was an iron gang chain, which was used for slaves. This was caught up in the teeth of a harrow and was not at first identified as being ancient. It was attached to a tractor and used to pull lorries out of the mud. Although around 2,000 years old, the chain apparently adequately performed this function. Identification of the chain prompted a thorough search of the area which resulted in the discovery of a large number of other objects, mainly of iron but some of bronze or copper alloy. A total of 181 artefacts are known to have been recovered.

The location is said to be an important centre for the Ancient Celtic Druids. Some of the offerings may have been made in response to the threat from the Romans. Roman forces under Caius Suetonius Paulinus captured the island of Anglesey in 60 or 61 AD. Most of the items found at Llyn Cerrig Bach can be seen in the National Museum of Wales in Cardiff.

The range and size of the Llyn Cerrig Bach collection is of great importance to our understanding of Iron Age weaponry, metalworking, tools and the development of art-styles. This collection is comparable with the famous discovery of metalwork at La Tne on the edge of Lake Neuchtel, Switzerland.