Tryfan, in the Ogwen Valley forms part of the Glyderau mountain range. Due to its distinctive pyramidal shape, Tryfan one of the most easily recognisable peaks in the region. Its rocky, blade-like shape has been likened to the upper body of a shark with three fins running along its top. Rising to 3,002 feet (915 metres) above sea level it is one of the highest mountains in the Glyderau. 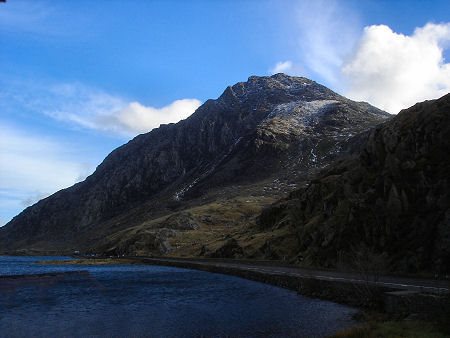 Tryfan offers some of the best mountaineering, scrambling and rock climbing anywhere in Britain. The summit of Tryfan is famous for the angular monoliths known as Adam and Eve, a three metre high pair of rocks standing a few feet apart, which are clearly discernable from the valley to the north-east, from where they resemble two human figures.

The mountain was formed by the truncation of a ridge, by the action of glaciers that flowed down the Ogwen Valley during the last Ice Age, which makes the North face of Tryfan extremely steep.The best view of Tryfan is from the east (Capel Curig) side 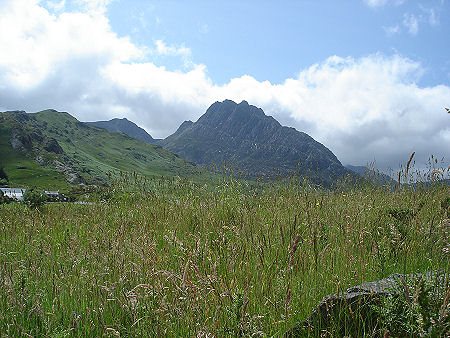 The Milestone Buttress at the base of Tryfan is a popular location for climbing. The Buttress is situated about a ten minutes walk from roadside laybys. The most popular route is known as the direct route. The rock is 75 metres long and graded Very Difficult.

The Route to the summit of Tryfan

Care should be exercised on this walk, particularly in wet weather when the ground is slippery

*Commencing at Idwal Cottage by Llyn Ogwen, follow the track which leads upwards by the waterfall to Llyn Idwal.

* Pass a further waterfall via a wooden bridge. On arrival at a sharp bend to the right to Llyn Idwal, continue straight on. Ahead may be seen track up by a waterfall, follow this path until arriving at Llyn Bochlwyd or Australlia Lake.

*Proceed along the track which leads to a ladder stile over a wall at Bwlch Tryfan. To your right Bristly Ridge is now visible. Do not cross the stile but follow the wall to the left.

*The path will reach a point where it begins to descend slightly. Go up to the right scree slope.

*The ground will become more rocky as you ascend, passing a ladder stile over a wall just past the Far South Peak. Continue to the summit and the Adam and Eve Monoliths. 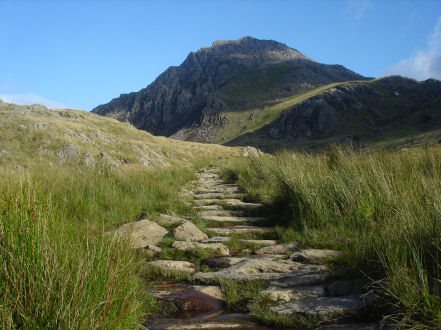 *Retrace your steps to return to Idwal Cottage.

Obtain a reliable local weather forecast before you set off and plan a route suitable for forecast conditions. Check your equipment before leaving, take waterproofs, spare warm clothing, hat and gloves. food and drink, a map, a compass and a survival bag. Learn basic mountain skills, particularly navigation. If weather conditions turn bad, turn back. Don't rely on mobile phones.