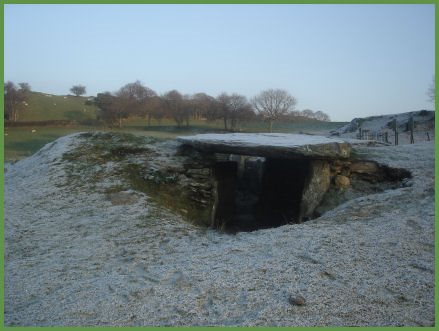 Menu of prehistoric sites in Snowdonia and the Isle of Anglesey featured on this site:-

Bron y Foel is situated near the town of Barmouth and is a particularly badly damaged portal dolmen located a few miles from Dyffryn Ardudwy. Its large capstone has fallen. At Dyffryn Ardudwy village, head northwards along the A496, turn right after the hotel and continue to the crossroads, turn right right again just before a farm, the tomb is located in roadside wall on the right.

Located 6 miles west of Pwllheli, on Lleyn Peninsula. Standing on a hilltop from village of Garnfadrun. The site consists of an Iron Age hillfort with drystone ramparts. It was rebuilt in 1188 by one of Owain Gwynedd's sons. Castell Garn Fadrun is said to be the oldest surviving stone castle in Gwynedd.

Situated at Penmaenmawr, the Druid's Circle is an unevenly spaced circle of 30 stones, with a diameter of around 80 feet.The stones are set on a bank of rubble. The enliance is through a group of 4 stones set about 8 feet apart. Within the circle archeologists found a food vessel and the cremated remains of a child, possibly evidence of human sacrifice. Neo - druidic ceremonies are occasionally still carried out here. Nearby Circle 275 consists of five stones and has been referred to as the smallest circle in Britain.

Ffrid Newydd is situated near Tal-y-Bont and is just off the A496. The monument consists of two stone circles which in a very bad condition.

Located at Llansanffraid Glan Conwy, just off the A470, Hendre Waelod Burial Chamber is a dolmen tomb on the River Conwy, which dates to 3,500 B.C. fronted by portal stones which rise to around 10 feet high. The tomb is covered a huge capstone. From the A470, turn right at the angled crossroad onto a lane for signed footpath; which crosses a field to woods.

Situated near Llanbrynmair, off A470. The site consists of a 75 feet in diameter circle which has 30 low stones and an outlying stone standing around 90 feet away. Cerrig Gaerau Stone Circle is nearby.