Heather clad Pen yr Ole Wen, pronounced as Pen ur Ola Wen, is the most southerly peak of the Carneddau Massif.

With its pyramidal peak rising to 3,209 feet (978 metres), it is the third highest mountain in the Carneddau range. The mountain lies to the north of Idwal Cottage youth hostel on the A5 road by Llyn Ogwen at the head of the Nant Francon Valley and is alternately accesible from Capel Curig..

Pen yr Ole Wen is often climbed as part of a longer route on the Carneddau range. It may climbed from the hostel by a path that leads directly up the south west "corner", climbing 675 metres in about 1.5 km (i.e. an average gradient of nearly 1 in 2).

A slightly easier ascent involves starting from Tal-y-Llyn Ogwen, about a mile south-east from the hostel, following the stream until nearing the outflow from the mountain lake Ffynnon Lloer and then branching left to take the path up the ridge. 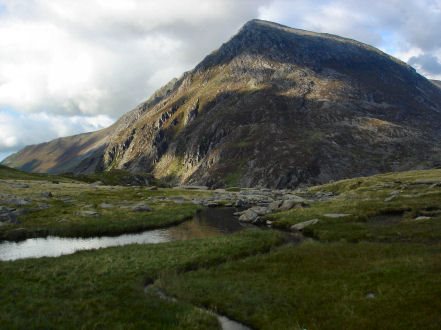 The name Pen yr Ole Wen has until recently been translated at "Head of the White Light," the interpretation of which remained a mystery, until in March, 2004, a lecture was given by the hill-walker and guidebook author John Nuttall, at University College, Chester, with regard to the translation of the mountain's name. The "Wen", he explained is a mutation of "Gwen," meaning white, and is the feminine adjective, therefore "Ole" cannot derive from "Golau," or light, as it is a masculine noun. The "Ole" instead, he asserted, derives from "Goleddf," or slope, therefore the correct translation of Pen Yr Ole Wen actually should be "Head of the White Slope."

The Route to the summit of Pen yr Ole Wen

*Commencing at Idwal Cottage by Llyn Ogwen (pictured left), walk along the road to Glen Dena at the eastern end of the lake. Proceed along the track that cuts through the wooded area.

*Before the furthest building, turn right along a wall, then cross the stile left over the wall and continue to follow the course of the stream for a long period. 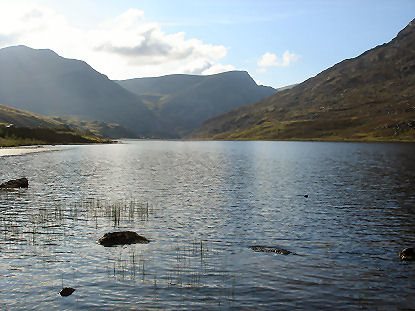 *A short while before the lake Ffynnon Lloer comes into sight, turn left onto a ridge that leads to the summit. The first section of the path on this ridge is indistinct and involves a small amount of scrambling.

Obtain a reliable local weather forecast before you set off and plan a route suitable for forecast conditions. Check your equipment before leaving, take waterproofs, spare warm clothing, hat and gloves. food and drink, a map, a compass and a survival bag. Learn basic mountain skills, particularly navigation. If weather conditions turn bad, turn back. Don't rely on mobile phones.