The Mawwdach river rises near to Lake Bala and is joined by the Afon Wnion downstream from Dolgellau. The poet William Wordsworth called it "the sublime estuary" and reported that " it could "compare with the finest in Scotland".

The estuary is a superb place to watch wading birds and gulls. A rail and footbridge runs from Morfa Mawddach Station to the resort of Barmouth.

Bontddu, set on the estuary hills which were the centre for the nineteenth century goldrush, experienced a brief boom at the time. Gold was discovered there in 1834 and prospectors flooded into the area. By the 1920's the industry had all but disappeared.

The Abergwynant Woods are one of only two surviving fragments of woodland on the estuary that where once a source of wood for shipbuilding that in the eighteenth century occured in creeks along the river. 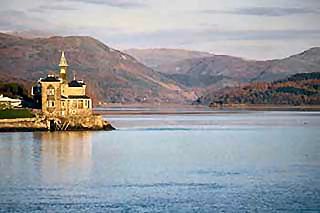 A walk at the Mawddach Estuary

Commencing at Penmaenpool, walk to the toll bridge which spans the estuary. Cross the road, passing the George III Hotel. Proceed past some cottages to a gate opening into a railway cutting, passing Abergwynant Woods on the left.

Continue along the track until reaching a bridge over the River Gwynant then bear left along the track which follows the river. At Abergwynant Farm go forward to the farm access track, leading to a road junction. Turn left and then immediately right onto the side road leading to the youth hostel.

Pass along the top edge of the river gorge. Turn left at the turning for Cae'n-y-Coed. Branch right at the fork, the path then climbs to the ridge of Dolgledr. At a yellow waymark marking a stile across the wall, cross the stile, descending into the valley and follow the path.Cross a stile, cross a wall and turn right to another stile. Bear left after the stile. At a waymark pole numbered '7' turn down the field toward the farm.

After passing through 2 gates, turn left to a further stile, and follow the track. Turn left at a rough access track, but as it bears right, go left across a narrow col between two hills, passing over a further stile. Turn left onto the forest trail and at the first cottage on the right, turn through a narrow gate with a waymark. At the Penmaenpool Road, turn left for the George III Hotel, there rejoining the estuary path.