The Bala Lake Railway known in Welsh as Rheilffordd Llyn Tegid, runs for 7 kilometres (4.5 miles) along the south east shore of Lake Bala and was built on a section of the former Ruabon - Barmouth GWR route which was closed in 1965.

The popular gauge line has three steam locomotives, two of which worked in the slate quarries of North Wales. The 2ft narrow gauge steam trains give excellent views of the lake amid its surrounding wooded scenery, and of the nearby mountains, Arenig Fawr, Aran Benllyn and Aran Fawddwy. The village of Llanuwchllyn ("the village above the lake") is the headquarters of the Railway and regular trains link the village with the town of Bala. At Llanuwchllyn, visitors can see the steam locomotives being serviced prior to coupling onto the train and can view the Signal Box. built in 1896, in operation. 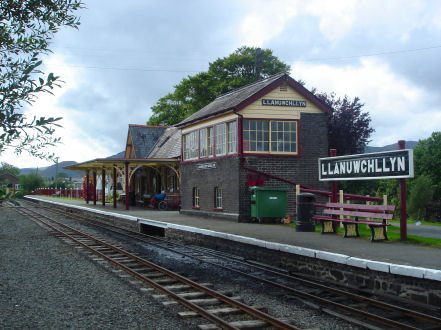 The Bala Lake Railway steam trains normally in use are over a hundred years old and are ex-quarry engines. All but one of the five steam locomotives currently at Llanuwchllyn were built by the Hunslet Engine Co. of Leeds, England.

Light refreshments are available in the Station Buffet and there is a well stocked souvenir shop.