Plas Mawr, which translates into English as 'Great Mansion' is located at the heart of medieval Conwy's narrow streets.

Plas Mawr's white washed gatehouse, stepped gables and lookout tower dominate the town's narrow main street. An architectural gem, it is one of the best preserved Elizabethan town houses in the country and perhaps the most visited building in Conway after the castle.

The house was built for the merchant Robert Wynn between 1576 and 1585. Robert was the son of Sir John Wynne of Gwydir, a member of the wealthy and influential Wynn family, whose family seat was at nearby Gwydir Castle. Robert Wynn was a courtier who rose to emminence amongst the Welsh gentry. He fought and was injured at the Siege of Boulogne in 1544, took part in military campaigns in Scotland and traveled extensively through Europe. He invested in land across North Wales and married his first wife, Dorothy Griffith, a member of the local gentry, in 1570. 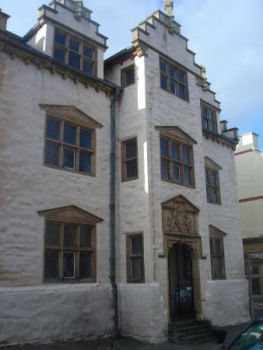 Robert bought a house in Crown Lane in Conwy from Hugh Mershe in 1570 he purchased further land to the north of this from Richard Peake in 1576. Work then began on the construction of the north wing of Plas Mawr, which was completed the following year. The former house was demolished and the central and south ranges were built by 1580, finishing the main part of Plas Mawr. Wynne went on to purchase land facing the High Street in 1585, on which he built the gatehouse which formed the entrance to the building.

Plas Mawr is entered today through the gatehouse, visitors cross the lower courtyard and on into the hall of the main building. The main house forms an 'H' shape, with a north and a south wing which are joined in the middle, which all face onto an upper courtyard. In the south wing was the hall and the buttery, the wooden benches and table on displayed there are original to the property. Above these rooms is the great chamber, the main room which formed the ceremonial centre of the house. 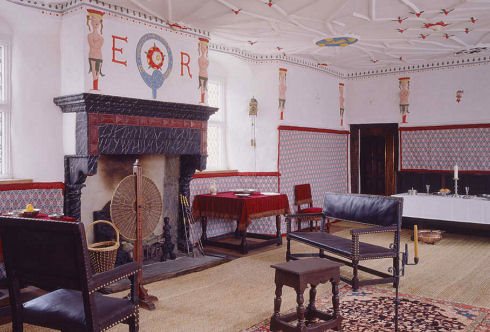 The building's interior boasts decorated plaster ceilings and colourful coats of arms reflecting the wealth and influence of its Tudor founder. The ornamental plasterwork in the hall, now painted in its original vivid colours, is particularly exquisite.

Plas Mawr also contains much fine period furniture. The house's Lantern Room is reputed to be haunted and local legend relates the tale of a tragic series of events which once took place there involving the death of a family.

The house has been restored as Wynn's Elizabethan Town House and reopened to the public. It is presently in the care of CADW, the agency entrusted with preserving the heritage of Wales. Exhibitions include audio visual displays which chart the restoration of the building and about the health and hygiene practices of the Tudor and Stuart periods.